Literature / Halfway Across the Galaxy and Turn Left 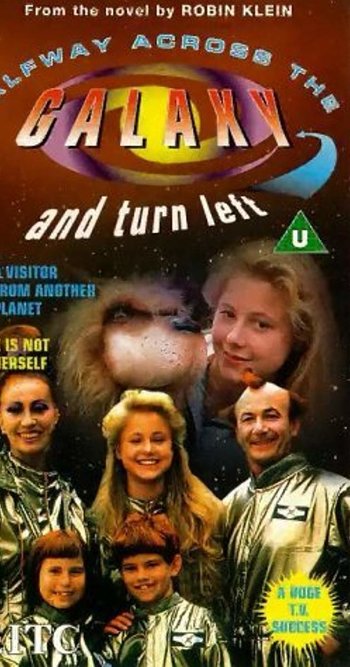 "I am a Family Organiser. I am solely responsible for the family well being at all times."
— X on her role in her alien family at around age ten.
Advertisement:

Halfway Across the Galaxy and Turn Left is a children's novel by Robin Klein, which was turned into a 1994 television series.

When X's father is caught cheating in the Zyrgonian lottery for the 27th time, the Zyrgonian government loses patience. When they send their officials after him, the head of the family, ten-year-old X herself, sees no choice but to flee as far away as possible. So she and her family go halfway across the galaxy, and turn left, taking shelter on an ignored and primitive planet called Earth. Though originally intending only to hide out on Earth until the government is overthrown again, eventually, they decide they prefer living on Earth.

Followed by a literature sequel, Turn Right for Zyrgon, where the family and X's closest human friend, Jenny, are kidnapped back to Zyrgon to sort out some governmental issues involving their aunt. When Jenny gets mistaken for a goddess due to a reaction to Zyrgonian crystal cakes, things only get worse. Fortunately, they ultimately sort things out and choose to return to Earth.

The television series mostly focuses on X's problems controlling her loopy family on an alien planet, while the government on her own planet relentlessly searches for them. X's desperate attempts for her family to fit in with Earth society leave her fighting an uphill battle, and providing much entertaining television in the process.

This book and series provides examples of:

Alternative Title(s): Halfway Across The Galaxy And Turn Left