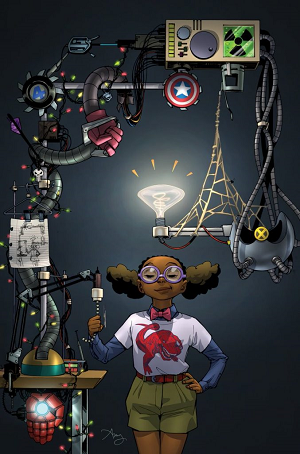 She's got a bright idea.
Sheen: I said, give me my free sundae!
Sam: And I said, there's no way you could've known there were 12,082 beans in that jar without cheating, yeah!
Sheen: I told you, I used the complex algorithm, based on the dimensions of the jar!
Sam: Uh-huh, yesterday you thought seashells were money! Today you're using algorithms?!
Sheen: Yesterday I wasn't a genius! Now give me my ice cream, monkey boy!
— The Adventures of Jimmy Neutron: Boy Genius, "Sheen's Brain"

One of the more challenging Stock Super Powers to possess and write for, Super Intelligence describes a Smart Guy so mentally gifted or super-powered they can complete a dozen doctorate degrees in the fifteen minutes, forty two seconds it takes them to walk across a university campus.

Super Intelligence can be divided into roughly four big effects, which can be used individually or in combination:

Thanks to Brain Critical Mass, the Super Power Lottery version of this trope gives the character Telepathy, Telekinesis, and/or other Psychic Powers.

Super Intelligence is a difficult power to possess, not only because Intelligence Equals Isolation, but because it can create a pessimistic worldview. Since most super smart characters are already elbow deep in Phlebotinum, the transition to Mad Scientist isn't a big one. All together, the fall into a Science-Related Memetic Disorder in the pursuit of science makes a lot of Super Intelligent characters become villains. It's no picnic for Science Heroes either, they can fall victim to the anti-intellectualism of those they want to help. Also, their brains tend to go watermelon sized.

That said, a super smart character has the potential to radically alter a setting and even create Singularity level tech. These changes can be positive or negative depending not just on their morality, but on how the setting treats science. If the Status Quo Is God, then Reed Richards Is Useless, there are No Plans, No Prototype, No Backup, and all the Potential Applications are destructive. If it's not? Well, then expect to see wonders.

On the writers front, suffice it to say it's hard to write someone who is smarter than yourself by virtue of not knowing how to properly motivate, characterize, or empathize with them. Most writers get around this by treating the Super Intelligence as being only science related, and having no effect whatsoever on their interpersonal skills. Another potential hurdle writers cross is that, as an internal power, Super Intelligence has to be demonstrated verbally, usually through Sesquipedalian Loquaciousness or a Mouthful of Pi. Though a few plain spoken Super Intelligent characters might instead tinker with electronics or engage in sporadic Nerdgasms.

Superintelligent characters sometimes overlap with The Sleepless or The Insomniac, maybe because their mind is too active to ever be put to rest, or because they regard sleep as a waste of time. Inversions of this are found rarely if ever, though it could be argued that a mind that works more would also need more sleep — as a matter of fact, sleep is known to aid creativity,

in general. On the other hand, gifted children are known to need less sleep

even as infants, and exceptionally high-achievers (high IQ or otherwise) are known to sleep much less.

Potentially the biggest "risks" of writing a character with Super Intelligence is that they become a Deus ex Machina or Einstein Sue, capable of solving every problem with no trouble, or a TV Genius who develops stereotypical "smart person" traits without actually demonstrating their intelligence.

APOLLO was an AI subroutine designed to house the collective culture and knowledge that the Old Ones had accumulated. ALL of it.

APOLLO was an AI subroutine designed to house the collective culture and knowledge that the Old Ones had accumulated. ALL of it.