Wise Beyond Their Years 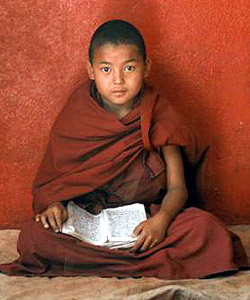 Frequently speaks in Little Professor Dialog and may enjoy Entertainment Above Their Age.

Contrast One of the Kids, Manchild, and Kiddie Kid. Compare Adorably Precocious Child, who tries to be like this but is still a kid at heart. Compare Child Prodigy, who is basically a TV Genius in child form. Innocent Prodigy is when a child really is like this, but still retains a childlike innocence in other aspects of life. If the character has an outgoing personality, they might be a Mouthy Kid or Little Miss Snarker, and when this character's maturity is displayed in a villainous light, they may become a Creepy Child. When every kid in a franchise acts like this (or at least most of them), it's probably because Most Writers Are Adults. Kids may be forced into this by living in a Teenage Wasteland. If the adultlike behavior is disturbing rather than impressive, it's Troubling Unchildlike Behavior. If a Child Prodigy acts like an adult in a child's world, rather than being thrust into the adult one, they're Acting Your Intellectual Age.

Higurashi: When They Cry