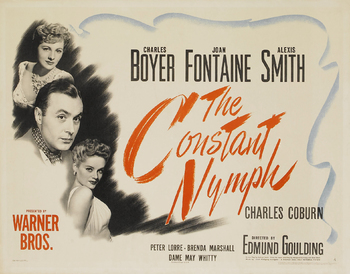 Lewis Dodd (Boyer) is a failed composer, and after a negative review, he goes to heal his wounds by visiting his friend and musical mentor Albert Sanger. His home is located in the Swiss Alps, and with him are his daughters to keep him company. These include: Paula (Joyce Reynolds), Tessa (Fontaine), and Toni (Brenda Marshall). They all love Lewis very much, but Tessa has a special place for him in her heart even though she’s only 14 years old. Lewis, in turn, treats her like he should, as a young girl.

Tragedy strikes when Albert dies, and Lewis writes to the girls’ rich English relatives, the Creightons. Their uncle, Charles Creighton (Coburn), and his daughter, Florence (Smith), come to handle the affairs and take the girls back to London. In those few weeks, Lewis falls in love with Florence, and she with him, causing much pain to Tessa.

Half a year later, and the marriage between Florence and Lewis is very much on the rocks.

Both Paula and Tessa are put in an English boarding school—eventually running away from it—, and Florence has grown to resent the affection Lewis has for the girls, especially Tessa's deep attachment to Lewis.

All things come to a head with Lewis' new musical piece; much to the chagrin of Florence, Lewis follows Tessa’s advice over her own and so begins an ugly competition.

Peter Lorre has a small supporting role as Fritz, whom Toni marries. Joan Fontaine considered The Constant Nymph one of her best performances, alongside Letter from an Unknown Woman which is something of a companion piece to this film, as they share many similarities. This film also gave Fontaine her third and final Academy Award nomination for Best Actress.