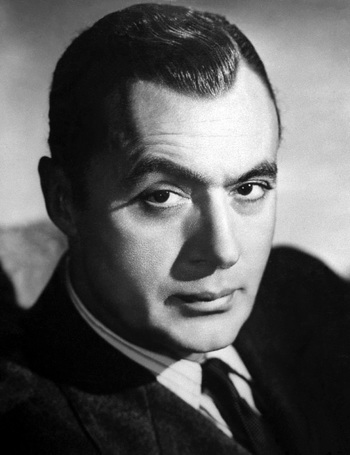 Charles Boyer (28 August 1899 – 26 August 1978) was a French actor who found great success in Hollywood, embodying the concept of European sophistication and class, and the perfect brooding romantic hero.note Ironically, he stood at 5'9", had a potbelly, and was prematurely bald, for which he required a Scully Box, a corset, and a toupee, respectively.

Boyer grew up in small-town southwest France. He managed to miss World War I, working as a hospital orderly before the armistice when he was 19. He made it to Paris and performed on the stage and in French silent film. He signed with MGM at the end of the silent film era, and his Badass Baritone French accent made him a natural fit for Hollywood. He bounced back and forth between French and American cinema, getting an early break in 1932 when he played Jean Harlow's chauffeur and boy toy in Red-Headed Woman. By 1936, when he was romancing Marlene Dietrich in The Garden of Allah, he was a huge star.

1938 saw Boyer's most famous role in Algiers, a remake of the French film Pepe Le Moko, opposite Hedy Lamarr. His line "Come with me to the Casbah," said in the trailer but not the film, would become strongly associated with Boyer. Other notable films in the thirties include Frank Borzage's History Is Made at Night (with Jean Arthur) and Leo McCarey's Love Affair. 1944's Gaslight, in which he played a rare villainous role as a jewel thief trying to drive Ingrid Bergman insane,note Bergman decided to make that film solely because she wanted to work alongside Boyer, who she greatly admired and respected earned him the second of four Oscar nominations for Best Actor (he never won)note Other nominated roles include Conquest, Algiers, and Fanny.

As he got older Boyer returned to French cinema, starring in Love Triangle drama The Earrings of Madame de.... He also returned to the stage, winning a Tony for Don Juan in Hell. He continued to work as a character actor, making his final film appearance in A Matter of Time (1976), which was also the last film of director Vincente Minnelli (with whom he collaborated earlier on The Cobweb). Another notable final film is Alain Resnais's Stavisky... playing an older mentor-figure to Jean-Paul Belmondo's smooth gangster-turned-Social Climber in a role and performance that alluded to his work in '30s French-and-American cinema.

Despite being known for playing French lovers who could have any woman he desired, Charles Boyer was only married once to British actress Pat Paterson. Their marriage lasted 44 years until Paterson died of a brain tumor. Two days after Paterson's death, upset over the loss of his love, Boyer died of suicide via a barbiturate overdose two days before he would have celebrated his 79th birthday.

His distinctive deep French accent was the inspiration for cartoon character Pepé Le Pew. Compare Maurice Chevalier, another French actor in Hollywood whose career overlapped Boyer's (and was the inspiration for his Looney Tunes counterpart); Boyer typically got the romantic and dramatic parts, while Chevalier played in musicals and light comedies.