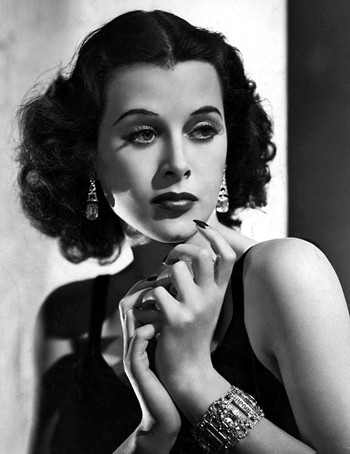 "Any girl can be glamorous. All you have to do is stand still and look stupid."
Advertisement:

She was born into a Jewish family in Vienna, Austria-Hungary, and acted in a number of Austrian, German, and Czech films in her brief early film career, including the controversial Ecstasy in 1933. (One of her first starring roles, it featured a long scene of Lamarr fully nude.) While the introduction of The Hays Code the following year made a repeat performance in America impossible, a reputation as a dark and glamorous Ms. Fanservice did follow her.

In 1937, Lamarr fled from her then-husband Friedrich Mandl, a wealthy Austrian ammunition manufacturer, secretly moving to Paris and then on to London. There, she met Louis B. Mayer, the head of Metro-Goldwyn-Mayer, who offered her a Hollywood movie contract, where he began promoting her as "the world's most beautiful woman". Subsequent films included an adaptation of John Steinbeck's Tortilla Flat and the Cecil B. DeMille film Samson and Delilah, which was said to be her personal favorite of all her films and arguably the film for which she is best remembered. Sadly, her career went into decline after that particular high point (it was the highest grossing film of the year for Paramount), and a decade later she retired from Hollywood.

Lamarr wasn't just an actress, however. She was also very mathematically talented; her most notable non-screen achievement was inventing (with composer George Antheil) a form of radio frequency-hopping that is the basis for components of wi-fi and cordless phones today. Her idea was that it could be used by the Allies during World War II to track German torpedoes, but the Navy Department wasn't interested at the time; as Lamarr's biographer noted, the Navy Department during the war didn't even listen to suggestions from its own officers, let alone a Hollywood star.note It did, however, adopt the technology after the war. Nevertheless, as Cracked.com put it, she was basically the world's sexiest Mad Scientist.

In terms of personality, she was remembered for having a strong-willed character and a sarcastic wit. According to her 2010 bio Hedy Lamarr: The Most Beautiful Woman In Film, she also had a peculiar habit of speaking about herself in the third person.

Lamarr was married six times and had three children. She became a naturalized U.S. citizen in 1953, and after ending her film career in 1958 spent the later decades of her life in virtual seclusion. She died of heart disease at the age of 85, after which her ashes were returned to her native Austria and scattered in the Vienna Woods.

Fun fact: DC Comics' most famous anti-heroine, Selina Kyle a.k.a Catwoman, is said to have originally been based on Lamarr. Anne Hathaway took this into account and loosely based her portrayal of Catwoman in The Dark Knight Rises on Lamarr.

Films in which Hedy Lamarr appeared include: