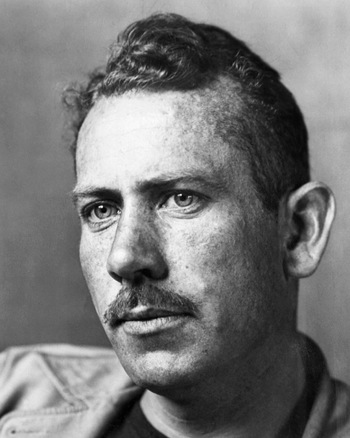 "The writer must believe that what he is doing is the most important thing in the world. And he must hold to this illusion even when he knows it is not true."
Advertisement:

John Ernst Steinbeck Jr. (February 27, 1902 – December 20, 1968) was a Pulitzer and Nobel Prize- winning American author. He wrote twenty-seven books within his lifetime, and became influential in his writing style and views.

Steinbeck was born by the Salinas River in California out in the country, which affected many of the settings of his works. A simple man, he labored alongside the migrant workers that inspired him. After leaving Stanford University without a degree, he set off his career with Tortilla Flat, a novel set in post-World War I Monterey. His Dust Bowl novels set in California garnered critical success and became some of his most popular works, such as Of Mice and Men. The Grapes of Wrath won the Pulitzer Prize in 1940, and became a controversial but influential work that ended up on the list of banned novels. It caused controversy with his leftist political views. The negative angle on capitalism and the representation of the Okies made trouble for him, but the book remained a success and is considered by many to be his best work.

In 1952, he gave the introductory narrations for the short stories of a film adaptation of O. Henry's Full House.

Steinbeck is known for showing the poor as decent people and the underdogs, and putting his views into his work. He was awarded the Nobel Prize in Literature in 1962 before he died in 1968.

John Steinbeck's works have become popular School Study Media and are still read today, traumatizing generations of American teens/young adults for ever after.