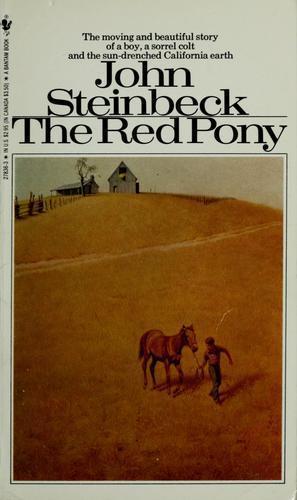 The Red Pony is a novella written by John Steinbeck about a boy named Jody Tiflin and the life he lives on his father's ranch. The novella was at first published in magazines between 1933 and 1936. It was collected in book form and expanded in 1937.

The book has four main episodes. In the chapter, "The Gift", Jody receives the eponymous red pony. Secondly in "The Great Mountains" he meets an old Mexican named Gitano, who buries the old horse Easter in the mysterious mountains. In "The Promise", Jody meets the man who births his mare's colt by way of the Caesarian section that kills her. Lastly in "The Leader Of The People", Jody's old grandfather visits and tells of how he misses being the leader of his old group on the Oregon Trail, while Jody comforts him.

It's a book commonly used in School Study Media, and was adapted into film in 1949 (with Robert Mitchum and Myrna Loy) and 1973 (with Henry Fonda and Maureen O'Hara).

Tropes used by the book: