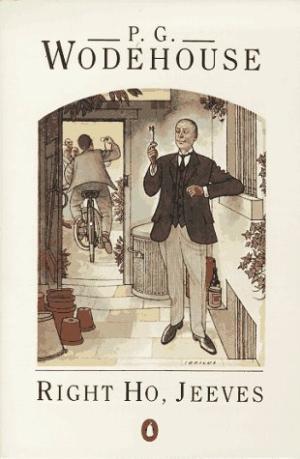 Bertie Wooster comes home from vacation in Cannes to find that his valet, Jeeves, is giving romantic advice to Bertie's old school chum, Gussie Fink-Nottle. Gussie has fallen in love with Madeline Bassett, an recent platonic acquaintance of Bertie's, but is far too shy to share his feelings with her. When Jeeves' idea to have Gussie make an impression on Madeline by dressing up as Satan for a costume party goes wrong, due to Gussie's own bumbling, Bertie decides that Jeeves has lost his knack for problem solving and decides to take Gussie under his own wing.

Meanwhile, Bertie's Aunt Dahlia is demanding Bertie come to her mansion, Totleigh Court, in order to present the end-of-term prizes at Market Snodsbury Grammar School. Fortunately for Bertie, Madeline Bassett is staying with Aunt Dahlia and her husband Tom, which gives Bertie an excuse to send Gussie instead.

Eventually, however, Bertie is forced to come to Totleigh Towers anyway. His cousin Angela (daughter of Dahlia and her husband Tom) has broken up with her fiancé, Tuppy Glossop, another one of Bertie's old school chums. And Bertie also must figure out how to coax Tom into paying for Aunt Dahlia's insolvent women's magazine, Milady's Boudoir. Bertie, who is miffed at Jeeves for disparaging Bertie's mess jacket, insists on taking all these tasks on himself rather than asking his hypercompetent valet. Disaster ensues.

This is the only Jeeves and Wooster novel that is available in the public domain.

In 2018 Castalia House published a comic book adaptation by Chuck Dixon under the Arkhaven Comics imprint. A digital version of the comic is being published at Arkhaven and can be read here