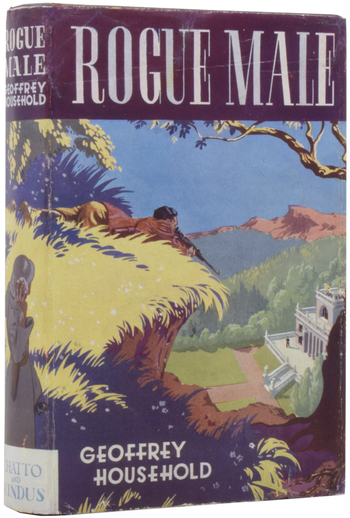 "The behavior of a rogue may fairly be described as individual, separation from its fellows appearing to increase both in cunning and ferocity. These solitary beasts, exasperated by chronic pain or widowerhood, are occasionally found among all the larger carnivores and graminivores, and are generally males, though, in the case of hippopotami, the wanton viciousness of the cows is not to be disregarded."
— Epigraph to Rogue Male
Advertisement:

A bored, upper-class British sportsman is found on the grounds of an unnamed European dictator's residence with his hunting rifle in hand, and subsequently arrested. His claim, maintained under torture, that he was stalking the dictator purely as an exercise in the skill of the hunt and that he had no intention of firing is so audacious that it is almost believed — but nonetheless he cannot be allowed to live. To execute such a well-connected Briton would cause an international incident, so his captors decide to kill him by throwing him over a cliff so that his body will show injuries consistent with accidental death. Though badly injured he survives and manages to make his way to the Channel and from there back to England. Where he discovers that home does not mean safety, nor an end to the pursuit.

Adapted into the 1941 20th Century-Fox film Man Hunt, directed by Fritz Lang and starring Walter Pidgeon, Joan Bennett, George Sanders, John Carradine, and Roddy McDowall. A Made-for-TV Movie version under the original title was produced by The BBC in 1976, directed by Clive Donner and starring Peter O'Toole in the lead role.