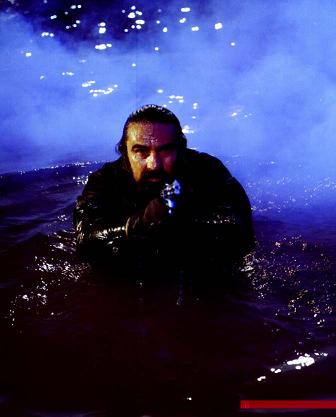 I am the warlord and the wrathful god of combat.
Advertisement:

, former Navy Commander who served in Vietnam, commanded SEAL Team Two and created the elite counterterrorist unit SEAL Team Six. He then put together Red Cell, reputedly a group with a two-tier purpose. The overt mission was to break into Air Force One, nuclear submarines, Camp David and other secure locations in mock terrorist attacks to test their security. Reputedly, their other mission was to find and eliminate terrorists.

Marcinko had a habit of pissing off the chain of command, who eventually spent $60 million trying to convict him of mutiny, something he actually did on numerous occasions. Though they failed, they were able to have Marcinko convicted for misappropriation of funds. Marcinko spent a year in prison, where he wrote his first New York Times bestselling book. How much of the case against him was legit and how much was vindictive brass trying to get payback is debated, but Marcinko is sufficiently controversial (and shady) that most Navy SEALs today consider him an Old Shame for Naval Special Warfare.

After the success of the first novel, Marcinko went on to create a series of fictional Self-Insert Fic spinoffs, where he fought rogue soldiers, Islamist terrorists, Russian mafia and neo-Nazis, and in his more recent novels, saved the world from Fidel Castro.

In 2009, the Development Hell video game was released. Sadly, it failed to live up to the series.

Do not confuse with Rogue Trooper, that's a different kettle of fish entirely.

Tropes associated with the Rogue Warrior: