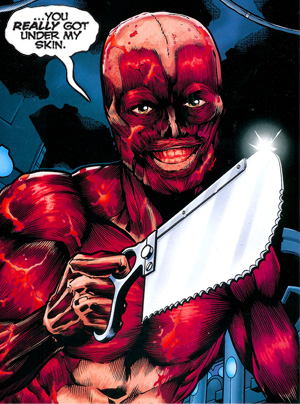 You know, usually, that's a figure of speech...
"A naked man has few secrets; a flayed man has none."
— Lord Roose Bolton, A Song of Ice and Fire / Game of Thrones
Advertisement:

We as humans like our skin to be intact. It protects everything inside the body from various diseases, and contains a great quantity of nerve endings — meaning that to have it forcibly removed is excruciatingly painful, and being stripped of enough of it will lead to a horribly slow death. As a result, flaying is the signature method of Cold-Blooded Torture for some of the very worst of the worst among villains.

Scalping is a form of this that was particularly prevalent in Injun Country— where it was the accepted means of proving a bounty on a Native to a settler government... In real life it was probably more common to take the scalp from a dead foe than from a living one, as their main purpose was to turn in for bounty (more portable than the whole skin.) But there were certainly some documented cases of people surviving a scalping.

For examples of... reusing the skin see Genuine Human Hide.

And if you feel the need for a bit of Soundtrack Dissonance, sing the title to the tune of The Bee Gees' "Stayin' Alive".