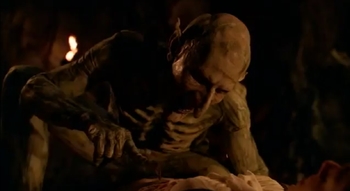 "Gnarl makes a pretty picture. It's easy when you know how. It's easy when everyone helps. They helped me. Too bad there's no one to help you."
"It's smellementary!"
—Dawn Summers
Advertisement:

At the airport, Buffy, Dawn, and Xander are waiting for Willow's return from England. As passengers leave the plane, Buffy and Dawn discuss the fact they are not sure how they are going to act around Willow, since the last time they saw her, she had killed and was ready to kill them. However, Xander intends to just treat her as he normally would, pointing out that Giles wouldn't have let her return until she'd completely recovered. Buffy then admits that Willow hadn't completed Giles's lessons, causing Dawn to worry. As Buffy assures her sister that Giles would not have sent Willow back if she was any kind of danger to them, Xander realizes all the passengers have disembarked, but there's no sign of Willow...

At this point, the same scene replays, except Willow leaves the plane with the other passengers; however, Buffy, Dawn and Xander are no longer there waiting for her. Willow is dejected that her friends weren't there to welcome her home.

Willow lets herself into the Summers house, which appears to be vacant. Going up to what used to be her room, but now has been claimed by Buffy, Willow is reminded of Tara's death. She looks through Buffy's planner and sees contact numbers for everyone but herself, deepening her fears that Buffy, Xander and Dawn no longer consider her a friend. A door closes and Willow goes to investigate, but still her friends are nowhere to be seen. Alone, Willow curls up on the couch. Buffy, Xander, and Dawn return home. Giles has confirmed that Willow definitely should have boarded her plane, however she may have diverted during her transfer in Chicago, or may possibly have slipped away and never left England in the first place. They hear a noise upstairs and check it out, but find nothing. In the living room, the three talk about the reason for Willow's disappearance.

The next morning, Willow tries to call Giles but can't get through as he is in a long meeting with the Watcher's Council. She then heads for the remains of the Magic Box and finds Anya collecting some things from the now burnt out building. Anya is very cold to her and Willow feels guilty about everything. They talk a bit, and Anya fills Willow in on everyone's activities since she's been gone. Willow checks out Xander's construction site, and instead of Xander, she finds a skinned body. At the same time, Xander and Buffy are looking at the body and the familiar sight, makes them wonder if Willow has embraced dark magic again. They hear a noise but cannot see a disgusted Willow climbing the ladder behind them to exit the site at that very moment.

Willow walks the halls of Sunnydale High and proceeds down to the basement, where she finds Spike acting insane. He talks to Willow about the dead body, but also carries on a conversation with something or someone else in the room that Willow can't see. Buffy and Xander maneuver through the basement and find Spike seemingly talking to himself. Buffy and Xander try to get information from him, but Spike is simultaneously conversing with Willow, so his words make little sense. Spike suspects they can't see each other and that Willow's responsible for it. Buffy and Xander interpret some of Spike's comments to mean that he knows about Willow and they suspect she might have something to do with Spike's unstable condition.

Willow goes to Anya at her apartment for help in finding the demon that skinned the guy at the construction site. Anya helps Willow cast a spell to locate demons all over Sunnydale. After the spell is complete, Willow asks Anya to teleport to a cave just outside of the town that showed up on the map. But Anya reveals that she can't for non-vengeance business as a result of her recently undoing a spell.

Instead, Willow takes the long way and walks there herself. At the Summers' house, Dawn immediately begins searching on the computer for demons that skin people. Although Buffy thinks it's a waste of time, Dawn soon finds a demon that meets their specifications named Gnarl. The demon paralyzes its victims with its nails, and then eats strips of skin from the body and drinks the blood.

Realizing they need to search for the scent of blood, Buffy decides to recruit Spike to assist in tracking the demon. He leads them to a cave where the demon can be found. Willow is already there investigating the cave, and the Gnarl spots her. The rest of the gang enters the cave as well, but they don't see Willow. The demon scratches Dawn's stomach, inducing paralysis. Buffy and Xander take Dawn out of the cave and blockade the entrance, unintentionally trapping Willow with Gnarl. Trapped in the cave, Willow listens to the demon taunt her from the shadows in its sing-song voice. He slices her abdomen with a nail and thus paralyzed Willow is helpless against him as he sucks at the wound and starts to slice away slivers of her skin to eat.

Buffy and Xander carry a completely paralyzed Dawn into the living room while Buffy researches the Gnarl and the way to save Dawn. Anya is called to stay with Dawn while they prepare to return to the cave to kill the demon and save Dawn. Anya talks about seeing Willow and reveals that Willow may be at the cave. Panicked that Willow is trapped in the cave, Buffy grabs Anya to join them at the cave. Gnarl continues to eat Willow's skin as he tells her that her friends have abandoned her and she's all alone for him to eat. Buffy arrives and attacks Gnarl, while Anya tends to a badly injured Willow, who still can't see her friends. While Buffy fights Gnarl, Anya informs Willow that her friends didn't leave her alone.

Buffy pokes the demon in the eyes with her thumbs, successfully killing it and ending the paralysis on both Willow and Dawn. Buffy and Xander look where they think Willow is, while Anya runs for help, and slowly the spell making them invisible to each other wears off. Willow is relieved to see her friends and glad they didn't abandon her.

In the morning, Willow meditates and uses magic from the earth to re-grow the skin she lost. Buffy stops by to talk with Willow for the first time since their fight in the Magic Box. Willow reveals that her fear of seeing her friends and their judgment of her led to the invisibility problem from which they all were suffering. Buffy confesses her guilt over briefly suspecting Willow of the grotesque killing when Xander didn't, but Willow doesn't blame her for that. Willow struggles to start meditating again, but she's still weak. Buffy offers her Slayer strength to her friend, and joins in the meditation.