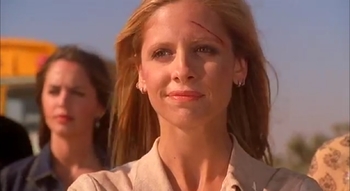 These endless days are finally ending in a blaze, and we are caught in the fire, the point of no return. So we will walk through the fire, and let it burn.
— Walk Through The Fire, from Once More With Feeling.

Buffy kills a bloody and beaten-up Caleb with the Scythe by slicing him in two from the crotch up. Angel gives Buffy an amulet intended to be worn by someone ensouled, yet more than human. He says he'll fight alongside her, but she rebuffs the offer and tells him to organize a second front with his team in case she can't beat The First. They discuss Spike, his soul, and Buffy's feelings for him; Angel shows obvious jealousy and annoyance about Buffy having feelings for Spike, while Buffy—annoyed by his childish and possessive attitude—questions his maturity ("Are you twelve?"). When Angel asks about the future, and if he has a place in it, Buffy says she still needs to grow up.

Buffy: I'm cookie dough. I'm not done baking. I'm not finished becoming whoever the hell it is I'm gonna turn out to be. I make it through this, and the next thing, and the next thing, and maybe one day, I turn around and realize I'm ready. I'm cookies. And then, you know, if I want someone to eat m—or enjoy warm, delicious, cookie me, then that's fine. That'll be then. When I'm done.
Advertisement:
Angel: Any thoughts on who might enjoy—do I have to go with the cookie analogy?
Buffy: I'm not really thinking that far ahead. That's kind of the point.

As Angel walks into the shadows, Buffy tells him there might be a future for them, but it will be a long time coming, if ever. Angel's reply? "I ain't getting any older."

Back at the house, Dawn kicks Buffy's leg for having Xander try to take her away from Sunnydale in the previous episode. Spike is in the basement, working out his anger on a punching bag with a crude drawing of Angel's face on it. That sight irritates Buffy, who ponders putting the two vampires in a room and letting them fight out their problems. Spike asks for the amulet, whose exchange he had witnessed from the shadows. Buffy hands it over after she explains that it is meant only for a champion. She then tells Spike that she has nowhere to sleep, and after an initial prideful rebuttal, he invites her to stay.

Later that night, an insomnia-stricken Buffy paces the basement as Spike sleeps. As she paces, The First appears to her as Caleb, unhappy that Buffy killed him—but eager to point out how an army of the undead waits to rise from the Hellmouth and help The First become corporeal. It shifts into Buffy's form and taunts her, reminding her that she's the Slayer—the one Slayer in the whole world. The First disappears as Spike awakens, and Buffy tells Spike she's realized something she hadn't considered: they're going to win the fight.

Buffy meets with the Potentials and her other allies the next morning, unveiling her plan off-camera. Willow expresses her concerns about using magic again (especially since whatever magic she'll be using will be the most powerful magic she will have ever attempted) and asks Kennedy to kill her if it turns bad. Faith and Principal Wood have a personal discussion while preparing the school for the battle; Wood demonstrates that he understands her defensiveness over getting emotionally involved with men, but still asks her to give him a chance after the battle. During the night, Buffy goes to the basement, where she apparently spends her last night with Spike.

On the morning of the assault, Buffy and her army arrives at Sunnydale High in a yellow school bus. The Potentials head to the seal in the basement while Kennedy helps Willow set up her spell in Principal Wood's office. After trying to give a farewell speech, Andrew is dragged off by Anya. Dawn leaves to set up her post with Xander, determined to see her sister again. Principal Wood leaves to wait at his post for Giles. The original four Scoobies share a last moment with each other before the assault by...talking about going to the mall after saving the world.

Buffy: I'm having a wicked shoe craving.
Xander: Aren't you on the patch?
Willow: Those never work.
Buffy: Never.
Giles: And here I am, invisible to the eye, not having any vote.

Xander and Willow walk down the hallway with Buffy before each one leaves to handle their assignments, leaving Buffy alone as she walks to the seal, where the Potentials, Faith, and Spike are waiting. Buffy, Faith, and the Potentials cut their hands to open the seal with their blood. They climb down the hole in the ground and come face-to-face with the army of Turok-Han. The Ubervamps spot Buffy and her army before they're ready and attack. "Come on, Will," Buffy pleads.

Willow sits in Principal Woods' office, the Scythe before her. While chanting a spell, she places her hands upon the Scythe, and both she and the Scythe light up in an ethereal glow as her hair turns white. The scene then flashes back to Buffy revealing her plan: she wants to break the tradition of "only one Slayer per generation" by turning every Potential in the world into a Slayer.

Buffy: In every generation, one Slayer is born, because a bunch of men who died thousands of years ago made up that rule. They were powerful men. This woman is more powerful than all of them combined. So I say we change the rule; I say "my power" should be "our power". Tomorrow, Willow will use the essence of this scythe to change our destiny. From now on, every girl in the world who might be a Slayer, will be a Slayer. Every girl who could have the power, will have the power—can stand up, will stand up. Slayers, every one of us. Make your choice. Are you ready to be strong?

As Willow performs the actual magic, Kennedy tells Willow that she is a goddess. "And you're a Slayer," Willow replies. Willow collapses, exhausted ("That was nifty!"), as Kennedy takes the Scythe and delivers it to Buffy...

...who is deep in the fight with her army against the army of the Turok-Han, which now numbers in the thousands. As she pauses to give orders, Buffy is stabbed through her abdomen from behind by one of the Turok-Han and falls to the ground. She passes the Scythe to Faith and asks her to hold the line. While Buffy tries to recover, she watches several of the Potentials-turned-Slayers fall, including Amanda. In the halls of the school, a few Turok-Han and a small group of Bringers make it to the surface and attack the groups guarding the entrances. During the battle, one of the Bringers kills Anya, and Andrew fights until he is overwhelmed. Another Bringer stabs Principal Wood, then dies by Giles's hand. Xander and Dawn take on a group of Turok-Han, who are disintegrated by sunlight when Dawn throws open a skylight window.

The onslaught seems relentless on all fronts, but nowhere more than in the Hellmouth, where The First appears to Buffy as a mortally-wounded copy of the Slayer.

It then kneels down in front of Buffy and mocks her attempt to stop its plans ("You pulled a nice trick; you came pretty close to smacking me down") before asking Buffy what more she wants. Buffy fires back with a angry retort—"I want you to get out of my face!"—then arises with renewed determination and knocks several Turok-Han off the ledge. Her determination helps reinvigorate the other Slayers, and as they fight, The First disappears. Right after that moment, Spike's amulet consumes him in blue light and blasts a hole upward into the sky. The amulet channels the sunlight shining through the hole, turning it into powerful rays that take out the Ubervamps. The entire cavern starts to shake, which the the surviving Slayers take as their cue to get out. Buffy tells Spike to escape, but he insists on finishing the job. They share a quiet moment as the world crumbles around them:

Buffy leaves, and soon after, Spike disintegrates as the Hellmouth collapses.

On the way out of the school, the Slayers find Andrew crouched in a corner. Xander yells for Anya, but doesn't see her dead and mangled body lying nearby; Dawn has to pull him out to the bus. Faith makes it on the bus last, and as it pulls away, Dawn looks back for Buffy—who has climbed to the roof of the school. Buffy runs along the school's rooftops in a desperate attempt to outrun the enlarging crater, then leaps onto the top of the bus at the last second. When she turns back around, she gets to watch the entire town of Sunnydale collapse into the crater.

After the ground stops shaking, everyone gets off the bus. Xander asks Andrew about Anya, and he says Anya died while protecting him, which seems to comfort Xander. Faith looks after a wounded Principal Wood, who charms her with a little bit of flirting despite his grave situation. While Kennedy, Vi, and a few others tend to the wounded Slayers, everyone else joins Buffy as she looks at the massive crater that was once Sunnydale. Giles asks how this could've happened, since everyone either died or is alive and with them. A distraught Buffy answers with one word: "Spike." Giles mentions that they should go to Cleveland, as there's another Hellmouth there—and lots more work to do. (An exhausted Faith responds, "Can I push him in?") The Scoobies lament the loss of the mall, which has ruined their post-war shopping plans.

After Dawn asks what they're going to do next, Buffy smiles as she contemplates the future ahead of her.