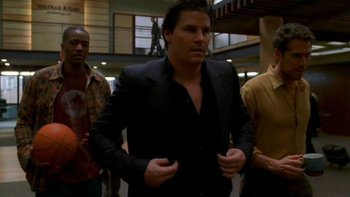 In a dark alley, a woman is attacked by a vampire; however, Angel easily manages to save her. He advises her to stay out of dark alleys and when he moves to leave, she asks who he is. He simply responds that it "doesn't matter..." when suddenly an operations team from Wolfram & Hart turn up. The man in command, Agent Hauser, introduces himself and explains that they tracked Angel through a homing device, while lawyers get the woman to sign release forms. Angel then learns that the vampire worked for one of the law firm's clients, before he and the woman he saved are put together for photos. The woman asks if he saved her for the publicity, but Angel (who is offered coffee by an assistant) tries to assure her he helps the helpless... Despite it looking entirely to the contrary.

At Wolfram & Hart, the gang start moving in to their new setting, which turns out to be far different from working out of an abandoned hotel. Fred gets lost en route to her office. Wesley finds her and she tells him that her lab is "giganormous" and she's unsure of the function of most of the machines in it. Her assistant Knox catches up to Fred; Wesley tries to make conversation by asking him how long he's been evil. After Knox leads Fred to her office, Gunn meets up with Wesley, who complains that Fred called her lab assistant "Knoxy". Gunn admits that though he feels completely out of place, they can turn things around and make them better even if its going to take a while to get comfortable... Only for Lorne to pass by talking to clients on his phone, showing he's already more than settled in. Meanwhile, Angel's liaison to the Senior Partners introduces herself as Eve; she tosses him an apple to drive home the irony of her name. She points out that if he wants to use Wolfram & Hart's power to do good in Los Angeles, he will have to be prepared to do some bad too, saying "In order to keep this place running, you have to keep it, well, running."

In his office, Gunn encounters Eve, and says that things were a lot simpler when he was just hunting vamps on the street with his gang. She wonders if he's ready for "the next step" and he confirms that he is; she hands him a business card and says "You'll feel like a new man."

The next day, Angel is unhappy to learn his new secretary is ditzy vampire Harmony Kendall who tried to have the gang killed during their last encounter; she tells him, "I'm strong, I'm quick, I'm incredibly sycophantic—if that means what that guy said—and I type like a superhero… If there was a superhero whose power was typing." Angel notes that the blood she's brought him tastes good; she tells him that the secret ingredient is otter. Wesley arrives, explaining he picked Harmony from the pool because he thought Angel would like having someone familiar around. "You turned evil a lot faster than I thought you would." Angel replies. Harmony's happy to be reunited with the group, especially Cordelia, until Angel breaks the news that Cordelia is in a coma and they have no clue if she'll ever wake up.

Harmony brings in client Corbin Fries, on trial for smuggling in girls for prostitution and cheap labor. He readily admits he's guilty; when Angel says he has no incentive to keep him out of jail, Fries says "Either you get me off, or I drop the bomb."

In a conference room, Lorne has each employee sing so he can read them for potential evil. In the science lab, Fred explains Lorne's skills to Knox; Knox tells her that if she wants him to, he'll go up and get read so that she can be sure he's not evil. Fred is still unsure that she'll be capable of running the whole lab. In Angel's office, the gang wonders if the bomb Fries threatened is mystical. Harmony says she has the address for a guy named Spanky, a "freelance mystic" whose name has shown up in Fries' file. Angel heads to the garage, which houses a fleet of expensive corporate cars, and takes one out to pay Spanky a visit. Spanky reveals he built a mystical container which can hold anything until the container is dissolved by a magic word. Back in the science lab, Fred and Knox look through Fries' file and discover he is linked to a cult which specializes in "quick-fire disease scenarios." When Fred tells him that Fries may be messing with a virus, Angel says that he knows where the bomb is: inside Fries' son.

Meanwhile, Gunn is enduring a stressful procedure at the doctor's office. Back at the firm, Fred tells Wesley that they've had no luck figuring out what virus Fries might be using. Eve pays Angel a visit in his office; she finds it ironic that Angel's dealing with a guy who put a virus in his own son when Angel just lost his son. She reminds him that Connor is happy and he's the only one who remembers him. Angel tells her that he doesn't want her to say Connor's name, and Eve says that if he takes every case this personally, he won't last long. Fred and Knox spend the night looking over files and photos while eating Chinese takeout. Frustrated, Fred accuses her crew of not working hard enough to save people. The next day, Fries' trial continues; Lorne calls Angel from the trial and says that he thinks they should isolate Matthew (Fries' son); as Agent Hauser listens in, Lorne tells Angel that Fries has no chance of getting off. Hauser tells his agents to take out the kid and anyone within 50 yards of him, and as Angel heads for Matthew's school, Harmony tells him that the special ops team are already on their way and they called for the cleaners. However, when the special ops team gases Matthew's classroom, they realize it's empty except for Angel. "So it turns out" he says, "with this new deal and all, I own a helicopter."

Fries' trial heads into final summations as Wesley reveals to Lorne that he's smuggled a gun into the courtroom, preparing to use it to stop Fries if necessary. Suddenly Gunn arrives in a nice suit and gets Desmond Keel to cede to him. Gunn moves for a mistrial and announces that the judge should remove herself from the case because, according to the judge's tax records, she holds stock in a company owned by a company owned by Fries'. The judge claims not to know about the connection, but Gunn says he discovered it in only six hours. The judge quickly calls a recess and holds an urgent meeting with the lawyers present. As Angel and the agents fight, Hauser calls him a "pathetic little fairy" who doesn't have what they have—conviction. Angel replies that he has something more powerful than that—mercy. He demonstrates the last of his by making Hauser shoot himself. Later, Eve explains to the group that Gunn agreed to let the firm "enhance" him with legal knowledge (and "Gilbert and Sullivan" for elocution). Angel wonders how Gunn knows for sure that nothing else was done; he said that he was in the White Room and is sure. Eve tells the group that they needed a lawyer, and Gunn had "the most unused potential"—and that he, unlike Angel, just saved the day without using violence. Wesley notes that they did disable the vessel and Gunn says that Fries has to lie low until the trial comes up again, and when it does, he can drag it out for a long time. Fred wonders if they're actually going to do good while they're there, since they've not only helped save a criminal but also returned him to the son he was willing to kill in order to gain revenge, but Angel thinks that they are. He opens an envelope he received earlier and the amulet he brought to Buffy in "Chosen" drops out. The amulet activates and Spike materializes in the office.