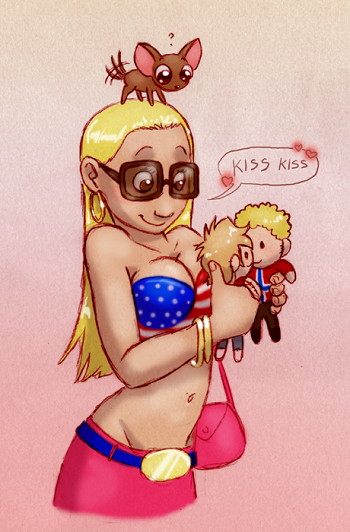 Strictly speaking, you can basically tell what kind of person she is.
"I have this "Jules and Jim" fantasy, definitely — you know, two men and a woman in love. And I remember reading in a magazine that the high you get from falling in love only lasts about four years. So with two men, you might be able to make it last eight."
— Dana Delany
Advertisement:

In the West, we are raised to believe that Girl-on-Girl Is Hot, and the media typically shows this because Most Writers Are Male. No questions! But in the East, it is the Spear Counterpart Guy On Guy Is Hot that is the sexual stimulant. While not as strong in the West (despite the growing number of Slash Fic) the way its Sister Trope is, it is the existing mentality in much of East and South East Asia. It's the reason for the Boys' Love Genre and the times when Homoerotic Subtext is played intentionally as a fetish. Some authors adhere to this or at least acknowledge its existence, and thus we get scenes of naked and half-naked men wrestling in mud, jello, or oil.

Just as often, though, there is a heavy Double Standard, and on both sides; straight men thinking Girl-on-Girl Is Hot tends to be dismissed as normal behavior, whereas the female enjoyment of Guy-on-Guy will be treated as a perversion (see Yaoi Fangirl). Or, in the other direction, some women will proudly declare their fascination with gay guys doing it while denouncing men who eroticize lesbians as exploitative perverts.

There are, in some cases, elements of But Not Too Gay to this trope: some women enjoy watching men wrestle and make out, but unlike men lusting after two women in such a scenario, it may be implied that they wouldn't find it sexy if the situation were to "escalate." However, large portions of fanfiction.net, Tumblr, and even a cursory visit to DeviantArt and Pixiv suggest otherwise, as does the fact that so many M/M (male/male) stories with explicit sex scenes are written by and for women. In fact, this trope has created a stigma to the point that many gay men actively avoid M/M romances by female authors due to their likelihood of catering to straight women's fantasies rather than resembling an actual gay man's life. Curiously, the demographic of men who enjoy the Yaoi Genre the most are bisexual men.

Buffy suggests putting Spike and Angel in a room and having wrestle in the nude while she watches.

Buffy suggests putting Spike and Angel in a room and having wrestle in the nude while she watches.