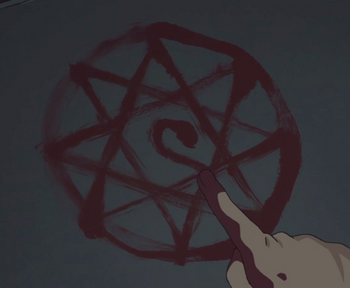 Not hard to learn, but it can cost you an arm and a leg.
"Blood is sound, sound is words, and words are power!"
— Grimoire Weiss, NieR
Advertisement:

Spilling of blood is a potent force in the working of magic. It may be a token sacrifice, but it may also be the loss of life that fuels the spell. Expect mages who practice Blood Magic to be portrayed as evil, or at least charcoal grey, with possible exceptions made for druidlike nature cults that may be considered amoral.

Some blood may be indicated to be more powerful than others. Common types are human blood, monster blood, the blood of royalty, the blood of a special line, the blood of an innocent, a child's blood, the caster's own blood,note as a self-sacrifice, this version is the only one even remotely likely to be practiced by good characters or virgin's blood. Sometimes only a single person's blood has power, and any other blood is powerless.

The other side of the coin is menstrual blood, which is used much less frequently but is associated with life magic when it is used. Except, of course, when it's the Menstrual Menace.

This trope is Older Than Feudalism, with blood and sacrifice being powerful magic in some of the oldest tales. A very old Greek curse was for a witch to run three times around the house she wished to curse while menstruating. Especially potent if it was her first period. It is frequently the alternative to Necromancy as the "evil magic".

Often overlaps with Black Magic, The Dark Arts and Cast from Hit Points. See also Our Vampires Are Different and Body to Jewel.

Frequently a part of any ritualistic Blood Bath. When it's the blood itself doing the damage, you have Bloody Murder. When the magic is used to extend the user's lifespan, it's Life Drinker. When it's used to create life, it's Fertile Blood. When it's used to heal, it's Heal It with Blood.

May even overlap with Tome of Eldritch Lore, which is often written in man's blood on parchment made of human flesh. Is often a cause for a Superhuman Transfusion.