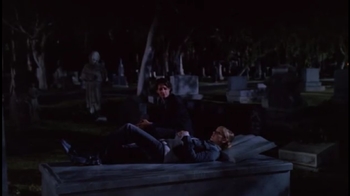 "Yeah, what I really need is emotional therapy from the evil dead."
"Time goes by, and everything drops away. All the cruelty, all the pain, all the humiliation. It all washes away. I miss my friends. I miss my enemies. I miss the people I talked to every day. I miss the people who never knew I existed. I miss ‘em all. I want to talk to them, you know. I want to find out how they’re doing. I want to know what’s going on in their lives."
— Jonathan Levenson
Advertisement:

While on patrol, Buffy is attacked by a newly risen vampire. They fight for a while and as he prepares to bite her, he recognises her from Sunnydale High. He tells her that the two of them were old classmates and his name is Holden. Buffy feels guilty as she clearly can't remember him at all. The two seem to have no inclination to kill each other and begin to reminisce. When Holden asks Buffy why she has a stake and why she's trying to kill him, Buffy tells Holden that it's her job as the Slayer. Holden takes the news surprisingly well and says it explains her absences and why she was often late at school. He tells Buffy that many of the student thought that Buffy was training to be a nun. Holden tells her that he was a psychology major and gets her to talk about herself, all in between bouts of trying to kill her. Holden predicts that Buffy will never truly connect with other and that Spike — who everyone thought couldn't hurt humans thanks to the chip — was the one who sired him. Buffy later stakes him.

At the Summers home, Dawn is home alone and plays with Buffy's weapons and tries on some of her clothes. She watches an old horror movie whilst talking on the phone to her friend, Kit before a series of knocks happen at the door. The phone line is cut as a malevolent force begins attacking the house. During the attack, Dawn sees images of her mother every now and then. Dawn believes it's her trying to contact her from beyond the grave and an evil spirit is trying to stop her. Dawn is able to drive it off and is visited by what appears to be Joyce's ghost who tells her that she predicts Buffy and Dawn will become enemies.

Jonathan and Andrew arrive back in Sunnydale after hiding out in Mexico. They're looking to dig up an artefact hidden by the Hellmouth. Andrew is secretly in contact with what appears to be Warren's ghost while Jonathan is having a personal revelation. Andrew kills Jonathan, under Warren's instructions, causing his blood to spill over the seal they dug up from the dirt.

In the library, Willow is visited by the ghost of student Cassie Newton, a girl Buffy unsuccessfully tried to save. Cassie claims she's been sent to Willow by Tara. The ghost relays a prediction that Willow will kill everyone unless she commits suicide. Willow isn't fooled and the figure reveals itself as the First, implying the other ghosts were also manifestations.

During the events of the episode, Spike is shown to be speaking to a young woman at the Bronze. She invites him back to her place where Spike vamps out and kills her, revealing what Holden said to be true. Worse than that is Spike doesn't appear to show any remorse in his actions.