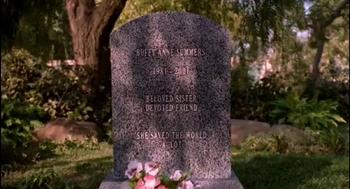 The hardest thing in this world is to live in it.
Advertisement:

The episode begins with Buffy saving a teenage boy from a vampire in the alley behind the Magic Box. When the boy asks how she could do that as she's just a girl, Buffy wistfully says that's what she keeps saying.

The Scooby Gang, knowing Glory has the upper hand, decide to go over the information they've gained. The Key (Dawn) is living energy that, when poured into a specific place at a specific time, will break down the walls between dimensions. Glory intends to use Dawn's blood to open the door and return to her own dimension, not caring about the hell that will be unleashed on Earth. However, if the energy is stopped then the dimensional walls will go back up. Giles puts forward the solution that Dawn must be killed, but Buffy refuses that as an option. Giles states that if Glory succeeds at her plan, every person on Earth will be faced with living in agony and torture. Buffy is unswayed, telling the gang that Dawn is more than just her sister; she's a part of her physically, emotionally and spiritually, and Buffy will not allow her to die. She apologises to the Scoobies but says she will put her sister before anything else.

Anya tries to break the grim mood by enthusiastically asking for suggestions on a battle plan to try to destroy Glory. Xander reluctantly suggests killing Ben, even though he's an innocent, as his death would kill Glory. Giles points out that it's unlikely Ben will resurface this close to the ritual. No one can think of a way to get rid of Glory, but Willow points out that they don't need to. She can only do the ritual once so they just need to distract her until her window of opportunity passes. Anya continues to press for ideas, pointing out what the Scoobies have in their possession that could help: the Dagon Sphere (meant to repel Glory) and Olaf's Hammer (which Buffy's enhanced strength will allow her to use). When they start to get a plan together, Buffy points out that they still have no way of actually finding Glory. Tara suddenly starts to try and leave, babbling about having places to be. Everyone realises that Tara is drawn to where the ritual is being held.

Back at Glory's lair, Ben gives Dawn some clothes to change into. He attempts to reassure her, but Dawn screams that he turn back to Glory. The goddess appears again and wants to know why Dawn chose her over Ben. Dawn tells her that she and Ben are both monsters, but at least she's upfront about it. Glory boasts that she could've killed Buffy at any point but Ben's humanity kept her from doing it. Dawn suggests that maybe she knew she couldn't take the Slayer. Glory doesn't take kindly to this and tells Dawn that her big sister isn't coming to save her and even if she does, she'll fail, as Glory will kill her.

At the Magic Box, Buffy trains for the upcoming battle as everyone else works on ideas. Knowing they can't set off too quickly, it's just a case of waiting for the right time. Giles apologises for suggesting they kill Dawn, but he states that he promised to protect the world and sometimes that means saying or doing things others feel they can't. Buffy says she understands but she'll stop him if he tries to hurt Dawn. The two reflect on the amount of times they've saved the world. While the apocalypse has been averted on several occasions, it feels like a hundred times to the pair. Buffy remembers how she sacrificed Angel to save the world, even though she loved him so much. However she feels like she's being asked to give away too much and doesn't understand how she can live in a world that demands so much from her. She tells Giles that the First Slayer told her that "death is her gift" and believes all a Slayer can ever be is a killer. Giles says that he thinks she's wrong. Buffy says to Giles that no matter what the First Slayer said, if Dawn dies, she's finished as a Slayer.

Xander and Anya finish having sex in the Magic Box whilst supposedly looking for the Dagon Sphere. Whilst looking for it, Xander comes across the Buffybot that Spike had built. Anya screams at a pink, stuffed rabbit toy and Xander says it's an omen. Anya notes how normally when it's the end of the world, she'd head for the hills, but her love for Xander is keeping her from going. She talks about her conflicted emotions when Xander suddenly proposes to her. Anya is initially angry; she thinks Xander's only proposing to look brave, as he won't actually have to go through with it. Xander assures her that he doesn't think the world is going to end and he wants to spend the rest of his life with her. Anya tells him she'll only accept if the world doesn't end.

Upstairs, Buffy asks Willow if she can use magic against Glory, given that she is the only one to ever actually hurt Glory. Willow points out that the spells used only worked for a couple of minutes and Glory has probably prepared for that. She does however think she can reverse the brain-suck Glory inflicted on Tara. Not only would this restore Tara's sanity, but it may weaken Glory as well. Xander and Anya return with the Dagon Sphere as well as a few other ideas.

It's time for Dawn to take her place for the ritual, and Glory asks two of her minions to take her up. Dawn struggles against them and sees what Glory's crazy people have been building. A huge tower has been built where Dawn will be taken to the top.

Buffy heads back to her house with Spike in tow. She invites him into the house and they both show they respect each other. Buffy asks Spike to protect Dawn and he accepts, knowing she'll never love him but appreciating how Buffy treats him like a man.

Sundown approaches and the gang knows that it's time to let Tara out and find Glory. She leads them directly to the tower. Glory spots her and demands to know what Tara is doing there. Willow ambushes Glory and reverses the brain-suck done to Tara. Glory is left dazed and in need of another brain to feed on, and, seeing Buffy, decides to eat the Slayer. Realising this could be a trap, she orders the minions to guard the path to the tower.

Glory is having trouble maintaining her composure thanks to what Willow did to her, before Buffy throws the Dagon Sphere at her. Glory instinctively catches it, causing her extreme pain for a few seconds, but she easily crushes it. These few moments let Buffy attack her and gain the upper hand, initially. Giles, Spike and Anya attack the minions at the bottom of the tower with the hope of breaking through to rescue Dawn. Meanwhile, Willow approaches a waking Tara, who recognises her girlfriend after having her sanity restored. Willow is overjoyed at having her back and Tara breaks down in tears after her ordeal.

Glory has regained her senses, deciding she's had enough of fighting with Buffy, and punches her so hard her head flies off—revealing she's been fighting with the Buffybot. The real Buffy sneaks up on her and hits her with Olaf's Hammer, the force sending Glory flying. Dawn calls out to Buffy, who fights past the minions to reach her, before Glory rejoins the fight. The two have a running fight up the tower. Buffy is thrown off, but manages to take Glory with her. Before Glory can take any action, Xander knocks her over with a wrecking ball and Buffy starts laying into her with the hammer. Glory states that she's invincible, but Buffy claims she's just happy to be dishing out the pain.

At the top of the tower, Dawn is surprised to see Doc with her, having been asked to come up and bleed Dawn if Glory couldn't get up there herself. Dawn is unaware that he is a worshipper of Glory and cries for his help. He instead pulls a knife and advances on her.

Giles, Anya and Spike aren't making any progress on getting through the minions and fall back, but believe they're winning as Glory can't get anywhere near Dawn either. Spike realises there's someone else on the top of the tower with Dawn. Willow telepathically asks Spike to run to the top of the tower, as she and Tara knock the guards out of the way. Spike takes his shot and sprints to the tower. When he gets there, Dawn calls out to him. Doc turns around to see Spike advancing on him. The two begin to fight, with Doc proving much stronger and faster than Spike. It allows him to get behind Spike and stab him in the back. Doc questions why a soulless vampire is going to so much trouble to protect something; Spike replies that he made a promise. Intending to make Spike break it, Doc gets behind him again, getting Spike in a hold. Spike and Dawn share a horrified look as they realise he's failed to protect her. Doc throws Spike from the tower and begins initiating the ritual himself.

After a beating from Buffy, Glory asks the Slayer to stop. Buffy replies that if Glory is a god, she'll be able to stop her herself. She then starts to beat Glory's face with the hammer, causing her to revert back to Ben. Buffy initially considers killing him in order to get rid of Glory but instead gives him a message: she's missed her chance and she'll need to leave and never return. If they do, Buffy will finish them both. She then leaves and tries to rescue Dawn. Giles tells Ben that Buffy couldn't kill him even though she knows Glory will re-emerge someday to exact revenge. Despite that, Giles tells Ben that she couldn't kill because she's a hero... not like them. Ben realises what Giles has said but has no time respond as Giles suffocates him, killing Glory in the process.

Doc begins to cut Dawn, causing her blood to drip down and open a portal where demons and monsters start emerging. Buffy runs to the top of the tower where the Doc waits, excited to take on the Slayer. Buffy isn't interested and pushes the demon off the tower, easily. She unties her sister, who already knows it's too late. Knowing the portal won't close until her blood stops flowing, Dawn plans to jump into the portal, believing that doing so will close the portal even if she dies in the process. Buffy stops her, realising the sisters share "Summers blood." After exchanging words with Dawn, Buffy runs to the edge of the tower and throws herself into the portal. She endures the supernatural energy for several seconds before she dies, closing the portal for good. At the bottom of the tower, Buffy's battered body lies lifeless. The heartbroken gang approach her and the last scene shows Buffy's grave.