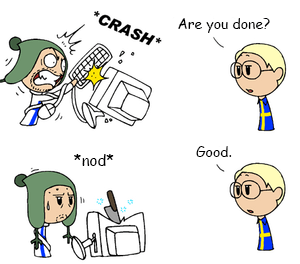 Jane: Does he ever like to have a temper tantrum now and again? I mean, he's the CEO of a large company and that comes with a lot of pressure, so... maybe he likes to let off some steam, throw a vase around or something?
Grace: Are you suggesting that Mr. Rochester, your employer? — makes sport of throwing decorative glassware? — in the middle of the night? — in his OWN HOUSE? — where his DAUGHTER sleeps? — because he needs to let off little STEAM — every once in a while?
— The Autobiography of Jane Eyre, "Interrogation"

Sometimes you are just angry. Angry enough that you decide to take it out on something or someone. Physically. This violent behavior may target a simple inanimate object, an opponent in a boxing match, or other similar situation, or maybe some convenient villain who happens to be in the area. Anyway, the point is that you are resolving your anger in a violent, but still somewhat socially acceptable way.

The psychiatric term for doing this in a therapeutic context is "catharsis". At one time this was all the rage, but it has fallen into disfavor among psychotherapists in the last few decades, as evidence has emerged that all it does is reward violent outbursts.

Can cross with Percussive Prevention if the person being prevented is getting on the preventer's nerves. Can cross with Percussive Shutdown in cases where a device stubbornly continues to function. This can also cross with Working Out Their Emotions, where they're getting some exercise while also pummeling something in anger. Contrast Get a Hold of Yourself, Man!, where the violence is meant to help calm the victim, and Percussive Maintenance, when the violence is motivated (at least partially) by attempting to make something work. Cathartic Chores may involve a good deal of anger directed at things like surfaces or dishes that need to be cleaned. Contrast Cope by Creating.

Subtropes of violence against inanimate objects to relieve stress include:

Shooting The Anger Off

Veronica has unusual methods of dealing with stress.

Shooting The Anger Off

Veronica has unusual methods of dealing with stress.