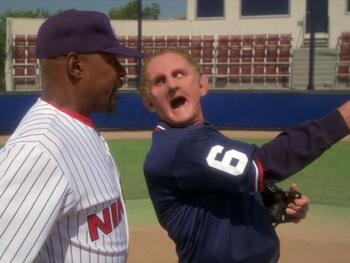 "Y'ERRRRRR OUTTA HEEEEEERE!!!"
Sisko is in his ready room when Kira calls. The T'Kumbra, recently returned from the front lines, has docked at DS9. Its Vulcan captain, Solok, wants to see him. The two are already acquainted, it seems. The conversation is a bit... stiffer than usual between fellow officers.
Sisko: It's been a long time.
Solok: Ten years, two months, five days.
Sisko: You mean you don't know it to the minute?
Solok: Of course I do. But humans are often irked by such precision. Especially the more emotional humans.
Advertisement:

They talk shop for a bit, subtly exchanging barbs, until Solok casually steers the conversation to a different topic. He wants a holosuite for his crew (all Vulcans, by the way) to enjoy a new program they've been running, based on an Earth game that perhaps Sisko is familiar with.

Sisko calls the senior staff to the ward room. Solok's crew has challenged them to a competition in two weeks. The crew is enthusiastic, but there's just one problem: none of them except the Siskos have ever played baseball before. Just learning all the rules and jargon is giving them a tough time.

The initial team, which they call the Niners, consists of Sisko, Jake, Kira, O'Brien, Worf, Bashir, Ezri, and Nog. Leeta and Rom volunteer soon after, and even manage to goad Quark into giving it a try. Odo is not playing; Sisko instead wants him to be the umpire, both because it will be more authentic than an AI umpire and because of his impeccable sense of fairness. Odo can hardly decline after a compliment like that.

The first practice goes about as well as one would expect, with half of them ending up in the infirmary, but they're making progress. Everyone except for Rom, who can hardly remember which side of the bat to hold (and is responsible for most of the injuries). After several days of this, Sisko eventually runs out of patience and kicks him off the team. This isn't received well by the others. They can't understand why Sisko insists on taking this so seriously. Kasidy, also a baseball enthusiast, has just joined the team after returning from a freighter run. She's determined to find out what the deal is with her boyfriend, and she can tell it has to do with Solok.

It all started at the Academy, when Solok's insistence on Vulcan superiority over "emotionally handicapped" humans got under Sisko's skin. With the kind of judgment that comes with a night of drinking, Sisko challenged him to a wrestling match to settle the matter. Well, Vulcans are three times stronger than humans, as well as much faster. You do the math. Sisko himself admits that he deserved the broken bones and bruised ego, and would have been willing to put it behind him. Unfortunately, the rivalry didn't end there. Ever since then, Solok has taken every opportunity to remind the galaxy of that day.

Advertisement:
Kasidy: You don't mean he was gloating. A Vulcan?
Sisko: That's exactly what I mean! He may have hidden it beneath that Vulcan calm, but he loved every minute of it. [...] He doesn't care about baseball. All he wants to do is rub my nose it in one more time. But now he is using my game. My game!

Sisko is too embarrassed by his motives to tell the rest of the Niners why this game is so personal to him. At his insistence, Kasidy promises not to tell them. So, of course, she immediately tells them. They all agree that Solok is a Jerkass who deserves to be taken down a peg.

Game day arrives. Both teams line up on the holographic field for the Federation anthem before the game begins.

Things don't start out so well for the Niners. By the fifth inning they haven't scored once, with only Jake's pitching keeping the Vulcans from reaching double digits. It looks like they may have their chance when Kira gets on base until Worf, with a full count, unexpectedly strikes out. He and Sisko dispute Odo's call rather emphatically, but he refuses to yield to them. Sisko loses his temper and jabs Odo angrily with his finger. Big mistake.

Odo: "No player shall at any time make contact with the umpire in any manner. The prescribed penalty for the violation is immediate ejection from the game." Rule number 4.06, subsection A, paragraph 4. Look it up, but do it in the stands. You're gone!

O'Brien takes over while Sisko goes to stew in the bleachers a few rows down from Rom, who has been loyally cheering the Niners on all by himself this whole time. As the game continues and Sisko cools off a bit, he makes a decision...

Sisko: Chief! Call time out.
O'Brien: Why?
Sisko: You're making a substitution.

And so at the bottom of the Ninth, with Nog on third, Rom comes out in uniform. It's not the best time for their worst player to take the plate, but that's not the point, and everyone cheers him on as he awkwardly shuffles forward. Two strikes later and it's not looking good, until O'Brien considers that maybe Rom can bunt Nog in for the run. They try to give the hand signal, but he only stares back at them, confused. The Vulcan pitcher, tired of waiting, throws the ball... which through sheer dumb luck ricochets off the distracted Rom's bat.

Nog slides into home and the Niners go wild, lifting Rom up on their shoulders! Annoyed by this disruption, Solok tries to get Odo's attention, briefly grabbing his arm before realizing his mistake. Odo tosses him off of the field like he did to Sisko (though with a sly grin on top).

The Niners lose 10-1, but celebrate at Quark's as though it were a victory. They know how stacked the odds were against them, and so does Solok, who seems chagrined by how much fun they're having. He tries to maintain his haughty attitude, reminding them that Rom got lucky and they're still the losers, but the Niners don't care. They laugh their opponents out of the bar, share a round of drinks, and Kira tosses Sisko a gift: a baseball signed by the team.

This episode contains examples of