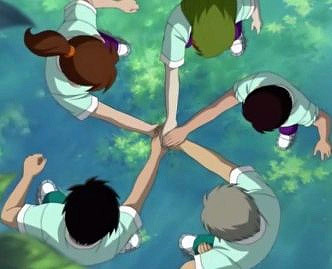 The Power of Friendship, visualized.
Chase: Sorry, I didn't realize putting your hand in a pile was some sort of legally binding contract.
Alex: It's symbolic.
— Runaways
Advertisement:

In order to show solidarity, camaraderie, teamwork, or friendship, a group of people will put their hands together, one on top of the other. Often accompanied with some kind of cheer. This tactic is a favorite of True Companions.

This is getting out of hand.

This is getting out of hand.