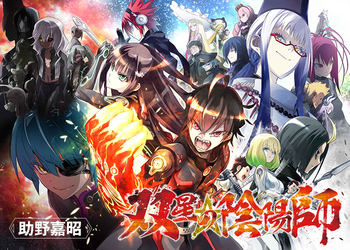 Twin Star Exorcists (Sousei no Onmyouji) is a manga by Yoshiaki Sukeno, creator of Good Luck Girl!. It tells the story about two kids (Rokuro and Benio) and their lives as exorcist warriors. Rokuro once had the dream to be the greatest Exorcist, and to cleanse all Impurities. But a tragedy in his past has made him no longer wish to have anything to do with exorcists. Enter Benio, a girl who, through a tragedy of her own, wishes to be the greatest Exorcist.

Needless to say the two don't really get along, but forces conspire to bring them together due to an ancient prophecy that states the child of their union will be the most powerful exorcist to ever exist.

Not to be confused with Blue Exorcist, another manga from Jump Square about fraternal twins as Exorcists.