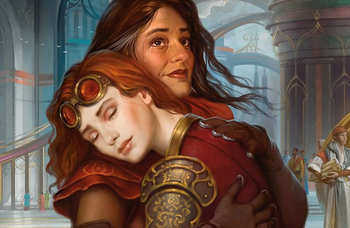 The chasm of years and worlds collapsed under the power of their embrace.
"It was the happy ending the nation wanted to see. The Capitol broke precedent and bowed to public demand by bringing Danny to the Capitol. The reunion was live during the final interview. There were tears, screams, and declarations of eternal love."
— The Victors Project
Advertisement:

This is it, the moment the whole story has been leading up to. Character X is finally reuniting with character Y again after weeks, months, perhaps even years apart. They've been looking, alternatively waiting, for each other for so long, they've never given up hope, and finally the day is here. Cue the Tears of Joy from the readers or audience as these two or more characters have a tearful embrace that's been long overdue.

Will often be the result of I Will Find You or I Will Wait for You. Alternatively, the Big Damn Reunion doesn't have to be the main plot of the story or even happen to the main characters; side plots of minor characters reuniting after a long while also counts, so long as there's an emphasis on the moment. If there're two characters seeing each other after a long while and either this is not treated like a big deal or the two characters are not happy to see each other (e.g., the hero and an old enemy of his), then the trope doesn't count. Big Damn Reunion means the characters have joyous tears at finding each other, and is often, but not exclusively, the conclusion of the story or of a character's plight. Expect it to involve a Meadow Run. Often results in The Glomp. If the reunion is a romantic one, it may also culminate in The Big Damn Kiss.

Note that it is not required for the characters involved to be actively searching for each other. One or both of them may have given up, thought the other was dead/gone, or even not tried to find the other character at all due to circumstances, and one day simply happens to find each other by chance.

Downplayed versions of the trope will happen when the two characters who meet are obviously happy to see each other, but are not able to show it due to circumstances. As long as there's emphasis on the characters being happy over reuniting, even if it's subtle, the trope still counts.

See Split and Reunion. Compare Class Reunion. If it's a reunion happening at the end of a character's life (or beyond), see Together in Death.

Warning: As this is a trope about two or more characters finding each other that often concludes a character's plight, or the story in whole, there will be spoilers.

Jewel Reunites With Her Father

Jewel reunites with her father Eduardo after many years where the two had believed they lost each other forever due to illegal loggers setting fire to their home causing them to be separated.

Jewel Reunites With Her Father

Jewel reunites with her father Eduardo after many years where the two had believed they lost each other forever due to illegal loggers setting fire to their home causing them to be separated.