Western Animation / How to Train Your Dragon 2 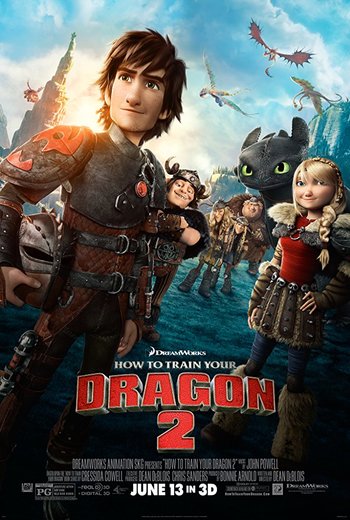 "We go where no one goes."
"This is Berk. Life here is amazing. Dragons used to be a bit of a problem, but now they've all moved in! And with Vikings on the backs of dragons, the world just got a whole lot bigger."
— Hiccup, Opening Monologue
Advertisement:

The DVD/Blu-Ray edition includes a mini-prequel called Dawn of the Dragon Racers, in which the young dragon riders start competing with each other as they round up a flock of runaway sheep, resulting in the first official Dragon Races on Berk.

Was followed by one last sequel, How to Train Your Dragon: The Hidden World.

How to Train Your Dragon 2 provides examples of:

open/close all folders
Tropes # to F
Tropes G to L
Tropes M to R
Advertisement:
Tropes S to Z
I'll swim and sail on savage seas
with ne'er a fear of drowning...
And gladly ride the waves of life
if you will marry me...
Feedback

Stoick recounts how Drago murdered all the chieftains for refusing to submit to him.

Stoick recounts how Drago murdered all the chieftains for refusing to submit to him.