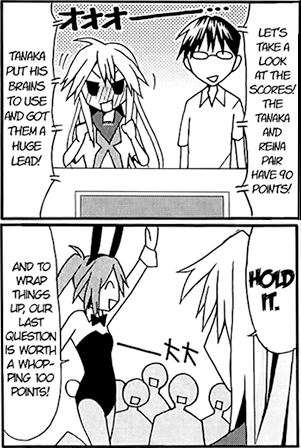 "At your feet is a little ball called the Buall'dib. You get a hold of this, and everything everyone else has done is null and void. You snag this...and we win."
(picks it up) "This?"
"WE WIN!!!"''
— Sluggy Freelance, "Ch. 31: Torg Potter and the Sorcerer's Nuts — Life at Hoggelryth"
Advertisement:

A Golden Snitch is a mechanic in a competition involving a series of events or activities in which the final round counts for a disproportionately large percentage of the team's total score — often more than all previous events combined. Thus, whoever wins the final round earns enough points to win the entire match, regardless of just about everything else that happened before it.

In works of fiction, the Golden Snitch is widely used to do one of three things:

It seems kind of stupid, but there are good reasons to do this. Game Shows in particular will do something like the "1-1-2 rule" — if there are three rounds (and game shows usually have a fixed number of rounds), the third is worth double the first two. The idea here is to preserve tension throughout the program. If all the rounds are weighted evenly, and someone wins the first two, no one will stick around to watch the third because the game has already been decided. But if the third round is weighted more than double the first two, the beginning of the program will become a waste of time because the entire game can only be decided by the final round. The "1-1-2" resolves both problems because now all rounds always matter — even a badly losing player coming from behind to win the third round will only tie the score, often leading to a Sudden Death round which can be really dramatic.

This, unfortunately, isn't the way it often works in fiction. They usually skew the final round to be insurmountable; instead of 1-1-2, you're looking at 1-1-3, or in extreme cases 1-1-1000. Sometimes it's tempered by making the Snitch optional; you don't need it to win, and it rarely happens because you need a very specific skill (which the heroes will often have). In any event, it essentially makes the remainder of the game pretty pointless; either you see the protagonist fight for the Snitch while everyone else is doing things in the background that won't matter, or you see everyone play the "normal" way and then suddenly go for the Snitch — even though going for the Snitch to begin with is probably the optimal strategy.

Compare One Judge to Rule Them All, where several judges award points but only one matters in the end; Comeback Mechanic, a more general mechanic that allows losing players to catch up; and Last-Second Ending Choice, a video game trope where the ending is determined by a single choice at the end rather than all the player's actions over the course of the game. See also Instant-Win Condition (and all of its varieties) for situations where points and scoring are not involved in determining who wins.

As Honest Trailers points out, in the last two minutes, whoever kills Zapdos first is guaranteed the win for Pokemon Unite.

As Honest Trailers points out, in the last two minutes, whoever kills Zapdos first is guaranteed the win for Pokemon Unite.