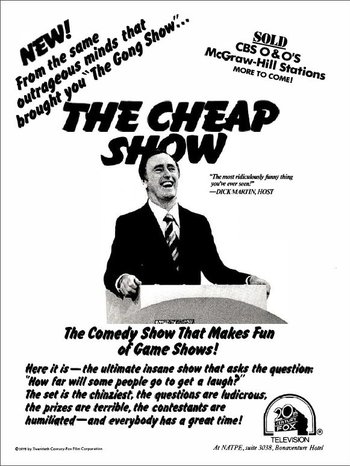 "The following program, although edited for television, still may contain some objectionable material. The producers feel that alone should be enough to make you stay tuned to this channel."
Disclaimer shown before the each episode.
"This authentic Early American bee smoker worth nine dollars and eighty-four cents, or any one of these other exciting, nearly-great prizes might be taken home by our contestants. And we have something horrendous in store for their unfortunate loved ones. All this and much, much less tonight on The Cheap Show! And here's the host of The Cheap Show — the only man we could find who'll work this cheap; the man who actually believes that his check is in the mail, Mr. Dick Martin!"
Opening spiel, as read by Charlie O'Donnell.
Advertisement:

Game Show that ran in weekly syndication from 1978-79 with Dick Martin of Laugh-In fame as emcee. Two teams competed, with Martin asking questions to a thr-oh, sorry, two-celebrity panel. The team "in control" then picked one of the two given answers; a correct pick awarded you a point (and a great prize such as Dick's toenail clippings) and one of your opponents got covered in slime, while a wrong answer gave your opponent the point and toenails while your teammate got covered in slime.

The first team to reach 20 points won the game and moved on to The Semi-Colossal Prize Sweepstakes Finale, in which the couple picked a hole from 1-12 and hoped the show's mascot hamster Oscar scampered into said hole.

The Cheap Show was a parody of low-budget games, with embarrassingly-cheap "prizes" and the most obvious Golden Snitch format ever — Exactly What It Says on the Tin, in other words, although that was the point.