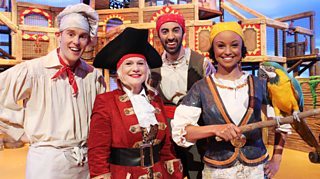 The pirate cast of the show
Advertisement:

A British pirate-themed children's gameshow on the CBeebies channel, in which jewels have been stolen from the host, Gem, by the villainous Captain Sinker and her two henchmen, Cook (a chef) and Line. A team of four child contestants play games against them to win the jewels back culminating in a search through a maze shaped like a ship. There's also a bit more plot than most gameshows with the pirate crew performing storyline sketches (or songs) in between the rounds.

Should the team win, Gem gives them each a souvenir jewel to take home and one of the bad guys is forced to walk the plank into a gunge tank. If the team loses, the jewels are locked away and Sinker comes over to gloat only to get her comeuppance in the end of the episode's storyline either through being Hoist by Her Own Petard or by Cook and Line's stupidity.