Pinball / The Phantom of the Opera 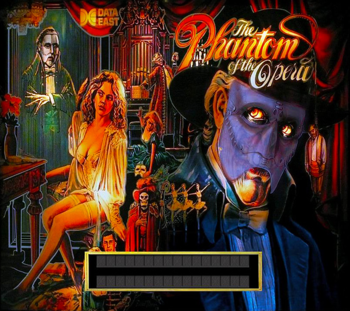 Not based on the hit Broadway musical.
"I am the Phantom of the Opera!"
Advertisement:

The Phantom of the Opera is a 1990 Physical Pinball Table released by Data East. It was designed by Ed Cebula and Joe Kaminkow, with artwork by Paul Faris.

Though released during the Broadway musical's runaway success, the game is not based from it. It is instead based on the original 1911 novel by Gaston Leroux. As the Phantom, scurry across the Catwalk, walk behind the Magic Mirror, then arise from the Trap Door behind the stage. Choose between the Scorpion and the Grasshopper, play the Organ and activate its secret passage, then start the three-ball multiball and steel yourself against the sight of the Phantom's disfigured face.

A digital version is available for The Pinball Arcade and Stern Pinball Arcade. This is the first Data East table to be added in the library.

The Phantom of the Opera demonstrates the following tropes: