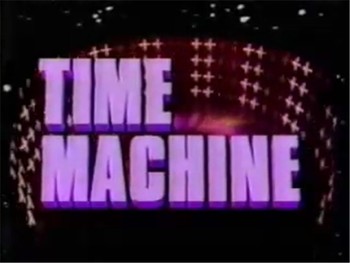 Join us, as we go on a journey back through time... on Time Machine!
Advertisement:

The year was 1985; Reg Grundy Productions had recently hit paydirt in the United States with its two NBC game shows, Scrabble and Sale of the Century. With that in mind, it was about time to go for a hat-trick: The result was Time Machine, a series that tested contestants' knowledge of things they have experienced in the past, but never quite like this.

In its original format, three contestants, the last of whom is a returning champion, played pricing gam—er, minigames involving history and pop culture from the past, to earn prizes for their "Prize Bank". Much like that show, Time Machine had a library of different games that could be played, including:

After all three games, the contestants then played the Time Capsule round: Four events and a popular song from a certain year were given. The contestant whose guess was closest to the answer won their Prize Bank, became champion, and moved on to the Bonus Round.

Time Machine flopped out of the gate so hard that it was revamped only five weeks into its run; the biggest change under the new format was that it was no longer a blatant clone of The Price is Right. The first three games were now played by two contestants for points, and the prize bank was scrapped in favor of just winning the prize automatically. Some of the existing games were salvaged and modified for the new competitive format (e.g., As Time Goes By now used an educated guess format, and the clock was divided into segments denoting dollar amounts, with $1,000 on the 12 o'clock space), while a few new games (such as On The Button) were added. However, there were only two sequences of three games that were used per-episode.* "As Time Goes By, Tube Game, Jukebox Game" was used on Mondays, Wednesdays, and Fridays, while "On The Button, 3 In A Row, Main Event" was used Tuesdays and Thursdays.

The winner of the first half now faced the returning champion in the "Challenge Round", which was just a re-named Time Capsule round with a car as a bonus prize instead of a cash/prize jackpot. Even with these changes, Time Machine became ancient history on April 26, 1985, after only 16 weeks on the air.

This game show is not to be confused with the 2004 British documentary series, narrated by Jeremy Vine.