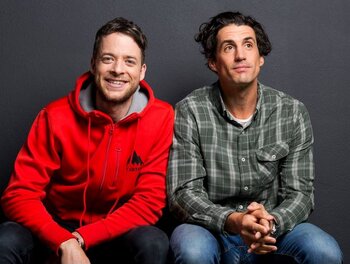 Hamish Blake and Andy Lee are an Australian Comedy Duo who, while most famous for their radio shows, have also dabbled in television; the two are something of an ubiquitous force in Australian media, regularly making guest spots on panel shows and the like. Their most famous effort is The Hamish & Andy Show, a weekly (daily until 2011) afternoon radio program on the Today Network.

After several years of doing television specials and guest appearances on Network Ten, the Nine Network signed an on-going television deal with the duo from 2011 onward.

Since 2019 Hamish has been host of the Australian version of LEGO Masters.

Tropes related to this comedy duo: