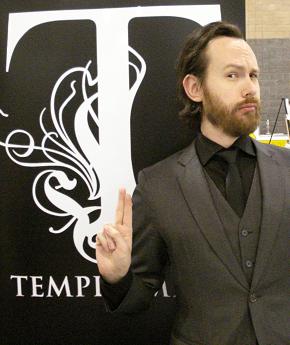 Will draw for coffee
Advertisement:

A somewhat mad Aussie artist, Ben Templesmith (born March 7, 1984) is known for his eerie, vivid style, dark humour and using a mixture of digital and traditional media in most of his work. He tends to favor slender, angular character designs, and primarily colors his art with watercolor paints.

His first commercial work was on a Spawn spin off, but the comic that really elevated him into the limelight was the creator-publisher-owned 30 Days of Night with writer Steve Niles. Since then he has illustrated many comics for IDW Publishing such as a Dead Space prequel comic and issues of Doctor Who and G.I. Joe; IDW has also published Templesmith’s own creator-owned comics such as Welcome to Hoxford, about a Sociopathic Hero who ends up in a extreme security prison that is actually a front for a pack of Werewolves and Wormwood: Gentleman Corpse, about a cadaver possessing, beer loving, demon worm and his gaggle of weird acquaintances.

In 2013, he joined forces with J. Michael Straczynski to illustrate a new series called Ten Grand, but Straczynski became concerned when Templesmith either would not or could not comment about updates on the work, and "with tremendous reluctance", decided to replace Templesmith after issue #4. A few days later Ben finally resurfaced, stating that he had been overwhelmed by personal issues and "a rather catastrophic move to Chicago where a bunch of my stuff is missing and I got other people's things". He apologized for his absence, saying that "I wish JMS & Ten Grand well but I think I'm incapable of monthlies in general, certainly on top of a lot of the other stuff going on, so everything seized up a bit & I collapsed in a heap so to speak as the snowball of lots of things not going as planned. & that's my issue, no one elses. I'm sure the book will still be fantastic, just without me."

After a lengthy email exchange between the two, his relationship with Straczynski stayed positive, and he even contributed variant covers to several more issues of Ten Grand. Templesmith then turned to Kickstarter to crowdfund his next project, The Squidder, about a genetically-enhanced Super Soldier who was built to combat the earthly legions of a squid-like elder god. Also in 2015, he launched a free webcomic, the sci-fi series Blackholers where, once again, humanity is being threatened by supremely intelligent squid-like creatures. He has remained somewhat detached from traditional comics work ever since, preferring to do covers when asked but focusing more on engaging more heavily with his fandom through the Patreon website, which also funds his creator-owned work.