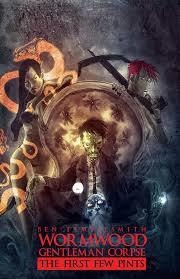 Wormwood: Gentleman Corpse is an irregular comedy-horror comic series by Ben Templesmith, published by IDW Publishing as a series of one-shots and miniseries during the 2000s. Although no new comic issues were produced for some years, it was announced in 2016 that an Animated Adaptation was entering development, and a new miniseries Wormwood Goes to Washington was published in 2017 followed by a Christmas one-shot.

Wormwood is not in fact a zombie, but an extra-dimensional magical larva who can use human corpses as puppets. Most of the time he can be found drinking in the Dark Alley Club, a sinister strip joint ("Sad, seedy loners welcome") with his buddy Mr. Pendulum, appearing to anybody who can't pierce his Perception Filter to be a seedy upper-class Soho alcoholic. He's actually, however, one of the main entities protecting Earth from a wide variety of extra-dimensional horrors, although he doesn't feel the need to be nice about it.

Not to be confused with The Chronicles of Wormwood, although there are some tonal similarities.