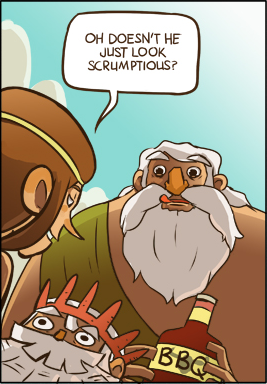 Baby Poseidon is Cronus' favorite type of seafood.
The idea of cannibalism is one of the oldest taboos in our history. As such, it's unsurprising that many creation myths and stories about gods have stories on them indulging in this act. Some gods have a habit of eating other deities, for various reasons. Sometimes it's to gain the power of the consumed divinity, or it's a means of getting rid of the competition.
Advertisement:

Occasionally, the act of deicide will involve mortals eating gods, usually to gain their powers or as some kind of ritual. Often when a god eats another god, it's a sign that they're an Eldritch Abomination. Either way, Assimilation Backfire is a common result.

Compare Monstrous Cannibalism (where monsters or other supernatural beings are not above eating each other) and Kill the God (usually has the same result as god eating, though without the cannibalism). Eating a god may be because they're considered Supernaturally Delicious and Nutritious. Related to Divine Conflict, with one god eating each other being a possible end to the conflict. May occasionally lead to Too Spicy for Yog-Sothoth.

Has nothing to do with God Eater.