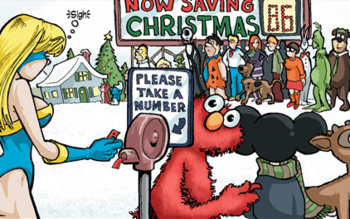 At this rate, you won't be seen until at least December 26th!
"This is the heartwarming true story of how the weed delivery guy saved Christmas."
— The Onion
Advertisement:

Rather than the typical Do They Know It's Christmas Time? sort of Christmas Special or Christmas Episode, many series (primarily action cartoons) feature some sort of plot in which the protagonists must "save" Christmas (or their local equivalent) in some manner. Flavors of this plot, which can be mixed and matched with each other, include:

Sometimes the Mall Santa will be called in to help. Be careful though, because Bad Santa might take his place. Luckily Badass Santa will come to save the day!

Extra points if, on realizing the predicament, someone remarks, "Christmas is going to be canceled!"

For the Kirk Cameron Mockumentary of the same name, which isn't really an example, see here.