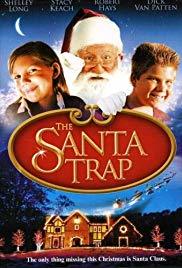 The Santa Trap is a 2002 made-for-TV Christmas Movie.

Molly Emerson (Shelley Long) is a businesswoman who is forced to move to San Diego by her job. She misses the snow and the pressure of the move affects her and her family. When her son tells his younger sister that there is no Santa Claus, she decides to prove it by capturing Santa in a homemade trap. Amazingly, it works, but her parents assume Santa (Dick Van Patten) is just a disguised thief, and he gets sent to jail. Once they realize their mistake they try to free him, but get a disguised biker (Stacy Keach) instead. Can Santa be freed in time to deliver all his presents?

Tropes in The Santa Trap: