God Was My Copilot 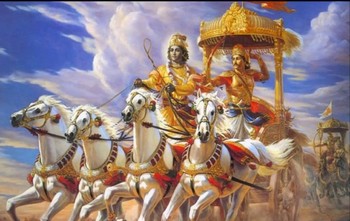 When your charioteer is Death, Destroyer of Worlds...
“I was the lion who forced you to join with Aravis. I was the cat who comforted you among the houses of the dead. I was the lion who drove the jackals from you as you slept. I was the lion who gave the Horses the new strength of fear for the last mile so that you should reach King Lune in time. And I was the lion you do not remember who pushed the boat in which you lay, a child near death, so that it came to shore where a man sat, wakeful at midnight, to receive you.”
— Aslan, The Horse and His Boy
Advertisement:

A specific type of The Reveal that deals with God or a similar powerful figure and shows them to have been with the protagonists just about from the beginning. May be especially jarring if it turns out to have been the Non-Human Sidekick or something similar, though usually enough hints are dropped that the savvy viewer can figure it out beforehand... most of the time.

If the protagonists are upset by the fact that the God figure didn't use their powers to help them earlier, a Hand Wave of "You Didn't Ask" combined with having to maintain the Balance Between Good and Evil is often used. Or possibly God just wanted to help the protagonist in some way without completely spoiling things for him. If God doesn't seem to do any miracles, but somehow nudged events anyways, He's working In Mysterious Ways. However, it's commonly kept ambiguous whether he did anything miraculous — or even whether he's God at all.

The opposite of this trope is the Louis Cypher. Compare Fairy Godmother, King Incognito, and Pals with Jesus. See also Angel Unaware and Hypercompetent Sidekick.

Due to the nature of this trope, massive unmarked spoilers ahead.

Alternative Title(s): Dropped A Brigid On Him