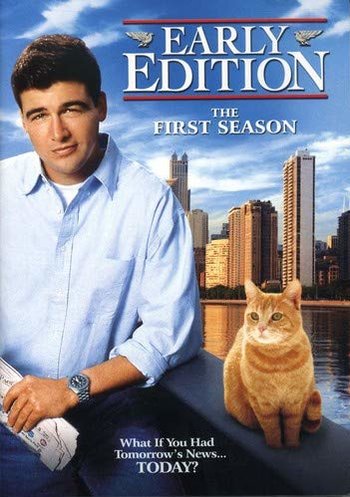 "What would you do if you received tomorrow's newspaper today?"
Advertisement:

That's the premise of Early Edition in a nutshell.

After his wife throws him out of his house, Gary Hobson (Kyle Chandler) starts receiving tomorrow's issue of the Chicago Sun-Times every morning, always accompanied by an orange cat. At first he tries to use this for personal gain, but after he sees an accident that was exactly described in the newspaper, he has a change of heart. By the end of the first episode, Gary and his friends Chuck Fishman (Fisher Stevens) and Marissa Clark (Shanésia Davis-Williams) start to use the newspaper to save people and prevent problems.

This fantasy-dramedy series ran for 90 episodes from 1996 to 2000 on CBS. It wasn't renewed for a fifth season, even with fan demand. The first season DVD came out in June 2008. Some auxiliary digital television channels have aired reruns, and the show is of course available on Paramount+.