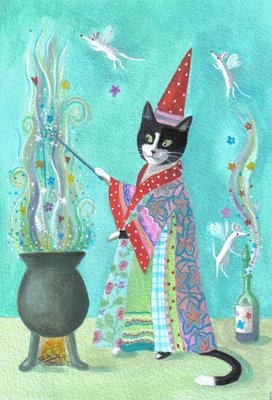 Did you think they got 9 lives without dark magic?
"For the cat is cryptic, and close to strange things which men cannot see. He is the soul of antique Aegyptus, and bearer of tales from forgotten cities in Meroe and Ophir. He is the kin of the jungle’s lords, and heir to the secrets of hoary and sinister Africa. The Sphinx is his cousin, and he speaks her language; but he is more ancient than the Sphinx, and remembers that which she hath forgotten."
— H. P. Lovecraft, The Cats of Ulthar
Advertisement:

Throughout history, cats have gone paw-in-paw with the supernatural. In Ancient Egypt they were considered to be sacred to the goddess Bastet; in medieval Europe they were tied to witchcraft; in Japan and Russia they are heralds of good luck; in the Muslim world, they are regarded as Born Lucky, benevolent jinn, while in other places they are harbingers of misfortune. In Western culture, cats are purported to have nine lives, and black cats in particular carry associations with witchcraft and both bad and good luck.

Unsurprisingly, when people write about cats in works with magic, cats tend to have magic too.

Because All Witches Have Cats, cats are almost certain to make an appearance in a work with witches, and more often than not, these felines will possess unusual abilities. Even in media without witchcraft, cats alone will sometimes be able to perform supernatural feats while other animals will be extremely mundane. If any one animal has the ability to be understood by humans or to use human speech fluently, chances are that it's a cat. A person will often choose the form of a cat when using magic to disguise him or herself as an animal. Similarly, using transformation as a form of punishment often results in a feline transformation. Sometimes their magic might appear in a Follow the White Rabbit form.

Usually a magical cat will be intelligent, but even non-sapient cats can have magical powers, with some even have Evil-Detecting Dog capabilities. Wittingly or not, cats may even be using their abilities to keep up The Masquerade. Despite all this, cats are not often Bond Creatures, except maybe to witches in the fluffiest of works. This is perhaps due to their reputations for being aloof and independent. This trope may mean a cat is an Evil Sorcerer if used in a story where Cats Are Mean.

The Black Cat from Coraline can not only talk, but freely travel between the real world and the Other World. And sometimes it even teleports.

The Black Cat from Coraline can not only talk, but freely travel between the real world and the Other World. And sometimes it even teleports.