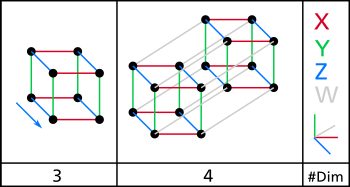 A popular idea in fiction that features Time Travel is the idea that time is not really any different from space—for whatever reason, we just can't perceive it as a spatial dimension or travel through it without technological assistance. Varying explanations are given for this.
Advertisement:

In Real Life, it's (more or less) generally accepted that there are three spatial dimensions that we can perceive and interact with. This is backed up by basic physics, since if these higher spatial dimensions existed, then forces that follow an inverse-squared law for effectiveness across space (in other words, their effectiveness decreases by the square of the distance) such as gravity or electromagnetism would follow an inverse-cubed law, or inverse-higher power law. Time, or any number of other variables, can be recognized as additional "dimensions", but with fundamental differences in how it works versus how space works; obviously, we can't just "turn around" and walk backward in time, or "turn around" and "remember" the future.

The idea of time as a spatial dimension has some roots in reality, as time is recognized by Real Life physicists and theoreticians as being closely tied to the dimensions of space, but not as a physically identical dimension. Additionally, string theory posits that there may be as many as eleven spatial dimensions that we just haven't evolved to perceive due to our inability to interact with them—a common (and very limited, but go with it for now) analogy is to imagine an ant that can only travel in two dimensions (barring its ability to climb up things, an ant cannot jump or fly), so the ant has naturally evolved to perceive the universe as two-dimensional.

Note that the most common way to play this trope is to have time portrayed as a fourth dimension, which explains why it's mostly encountered in fiction about Time Travel, but the core idea of the trope is simply that there are more than three spatial dimensions. A work that explores the ramifications of string theory's eleven dimensions, then, would be an unusual, but perfectly valid, example.

One of the earliest explorers of the idea of 4+ spatial dimensions was mathematician and Science Fiction author Charles Howard Hinton, who coined the term "tesseract", a four-dimensional cube. It's worth noting that any mention of a tesseract in fiction is practically a stock example of this trope. Hinton also coined the terms "ana" and "kata"note From Greek roots meaning "up toward" and "down from" respectively, now frequently used to refer to movement along the axis of a fourth spatial dimension (in the same sense as up/down for height, left/right for width, and forward/backward for length).

Note that this trope is not about just any work that features Time Travel, nor is it about a work that casually refers to time as a fourth dimension, unless it's made clear that time is being treated as "just another dimension like space".

Frequently found overlapping with Alien Geometries. The distinction between the two is that under normal circumstances (well, as normal as this sort of thing can be anyway) an object occupying more than four dimensions will still follow all standard rules of normal euclidian geometry.note Perpendicular angles are 90 degrees, parallel lines never intersect, squares have straight edges, the angles of a triangle add to 180 degrees, etc. If the additional dimensions are curved, however, normal geometry points to M.C. Escher and grabs a bucket of popcorn.

Not to be confused with Another Dimension or any of its Sub-Tropes—this is "dimension" in the sense of geometric dimensions, not parallel worlds or universes. Of course, the two may overlap.