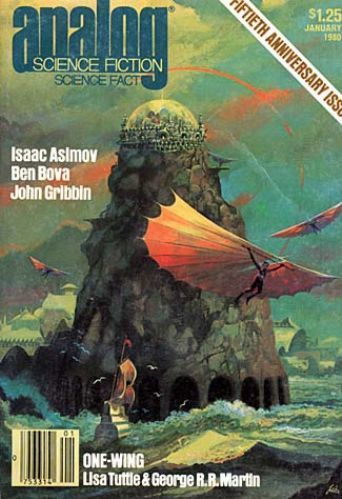 Here's to another fifty years!
Advertisement:

Among the oldest Science Fiction magazine, Analog has been around since January 1930, making it Older Than Television. Under its original title, Astounding Stories of Super-Science, it was designed as a rival to Amazing Stories. It remains one of the only Pulp Fiction magazines to have survived multiple transitions, such as moving from newsstands to big bookstore magazine racks, and the arrival of the internet: https://www.analogsf.com/

For most of its history, the magazine has been digest-sized.note In the early 1960s, Analog switched to bedsheet-size for twelve issues, but it proved too expensive. Since The New '10s, the magazine has been a bit larger, but still usually under 500 pages per volume. When John W. Campbell was Chief Editor, Analog led America in what fans and historians call the Golden Age Of Science Fiction. Even today, the magazine is popular enough to distribute copies throughout the international anglosphere.

The magazine, in an effort to stay fresh for new audiences, is always looking for new authors, including then-newcomers such as Orson Scott Card and Joe Haldeman in the 1970s, Greg Bear and Timothy Zahn in the 1980s, and Michael A Burstein and Rajnar Vajra in the 1990s.

Bates was the Chief Editor pushing for the magazine's creation in 1929. Under his leadership, the cover title shifted from Astounding Stories of Super-Science to simply Astounding Stories, starting with the February 1931 issue. The early years were difficult, and he had to change print companies multiple times. Starting with Publishers Fiscal Corporation, he changed to Readers Guild, and then The Clayton Magazines Inc. Along with the printing problems, Bates encountered Schedule Slip, missing October and December of 1932, as well as February of 1933. Bates's last issue as Chief Editor was March 1933.

Tremaine became Chief Editor starting with the October 1933 issue. The first change he made was to use Street & Smith Publications, Inc. as the magazine's printers. This partnership became a defining feature of the magazine and their names would be included even across other media (such as radio). Tremaine's last issue as Chief Editor was September 1936.

Campbell practically defined Science Fiction after becoming Chief Editor of Astounding Stories, starting with the October 1937 issue. His first fifteen years are often called the Golden Age of Science Fiction, and his long-lived stewardship of the magazine impacted many aspects of the genre's growth. Campbell encouraged mature stories with a strong element of plausible science, and would request essays by scientific authors to publish science fact in ways the layman could understand.

Campbell changed the magazine's name to Astounding Science-Fiction in the March 1939 issue and launched a UK version of the magazine in August that year. Then, in the February 1960 issue, he changed the name (again) to Astounding Science Fact & fiction (note the lowercase) and spent the next several months fading down Astounding and fading up Analog over a 12-month period while retaining the initial "A". Legally speaking, both names are used by the magazine (check the index page), but the cover has been Analog ever since (with occasional tweaks to the subtitle).
Campbell's last issue as Chief Editor was in 1971.

Bova had been publishing in the science fiction genre for a decade before he took over as Chief Editor, starting with the January 1972 issue. Although his term was relatively short, he kept the high standards that Analog had established, keeping writers' and readers' attention on the magazine until he passed the position on to another editor. Bova's last issue as Chief Editor was November 1978.

Chief Editor starting with the December 1978 issue, and the longest Chief since Campbell. His editorship was able to shape an era, although not to the same degree as the Golden Age. Schmidt's last issue as Chief Editor was March 2013.