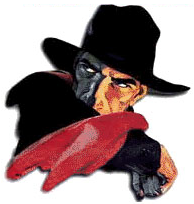 The Shadow was an American Radio Drama.

It is an adaptation of the wildly popular pulp fiction series, The Shadow, which premiered in 1931. This popularity led to a radio series in 1937, initially starring young up-and-comer Orson Welles. While the general format of the magazine series—a do-goofing Proto-Superhero went about by night, fighting crime, while posing during the day as a Rich Idiot With No Day Job—was retained, the stories were greatly altered to fit the format of a half-hour radio drama. Lamont Cranston, one of the Shadow's many aliases, was made his Secret Identity. The army of agents was replaced with "constant companion" Margo Lane (originally played by Agnes Moorehead), who became The Shadow's loyal sidekick, Girl Friday, and possibly girlfriend, although this was left deliberately ambiguous. Most famously, the Shadow was not merely a Master of Disguise who was good at hiding in the dark, but could actually become invisible by clouding people's minds!

The radio series was a hit, lasting for decades with several changes of lead actor. The Shadow has also had several Comic Book series, ranging in quality from excellent to terrible, including one from Dynamite Comics, a movie serial, a low-budget 1950s feature,and a 1994 feature film. He has even crossed over with Batman a few times, with the Caped Crusader idolizing him! In 2021 James Patterson (and coauthor Brian Sits) released a new Shadow novel that brings Lamont Cranston from the 1930s to the modern day, the first in what is meant to be a rebooted franchise for the character.

For the Comic Book series, see The Shadow. Not to be confused with the Fairy Tale "The Shadow" by Hans Christian Andersen.

The weed of crime...bears bitter fruit.