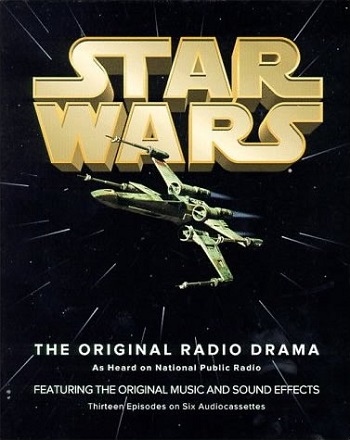 In 1981, 1983, and 1996, National Public Radio station KUSC-FM performed radio play adaptations of the original Star Wars movie trilogy. Considered part of the original Star Wars Expanded Universe (now Star Wars Legends), the plays were made with the full cooperation of George Lucas, who sold the rights to KUSC-FM (hosted by his alma mater, the University of Southern California) for a dollar apiece.
Advertisement:

Mark Hamill reprised his role of Luke Skywalker for both Star Wars and The Empire Strikes Back, before being recast by Joshua Fardon for Return of the Jedi after the 13-year delay. Anthony Daniels voiced C-3PO in all three dramas. Billy Dee Williams played Lando in The Empire Strikes Back but was replaced by Arye Gross in Return of the Jedi. All of the other roles were recast, with Perry King playing Han Solo, Ann Sachs as Leia, and Brock Peters (Admiral Cartwright in the Star Trek: The Original Series films) as Darth Vader. Some of the more well-known actors in the production include Ed Asner as Jabba the Hutt, John Lithgow as Yoda, Yeardley Smith (Lisa Simpson) as a robot in Jabba's palace, Adam Arkin as Fixer (one of Luke's acquaintances on Tatooine, not included in the films), and David Alan Grier as a supporting player.

All three series were adapted for radio by Brian Daley, who also wrote some of the earliest Star Wars tie-in novels. During the thirteen-year delay between The Empire Strikes Back and Return of the Jedi, Daley almost Died During Production— he died of cancer hours after the wrap party for Return of the Jedi in 1996.

The radio plays were formerly considered to be "G-Canon", which, by the Holocron's canon hierarchy, placed it in the same tier as the movies, but not as high as the movies themselves, and even below the scripts and novelizations. This became a moot point when they were thrown out with the rest of the EU by the 2014 "Legends" rebranding. Despite this, material from the dramatization for the original Star Wars (A New Hope) was adapted into the 2015 novelization A New Hope: The Princess, the Scoundrel and the Farm Boy, particularly the torture sequence with Leia and Darth Vader (however, the narrative of how Leia got the Death Star tapes is now completely superseded by Rogue One).

Daley wrote one more audio play, an interquel between A New Hope and The Empire Strikes Back called "Rebel Mission To Ord Mantell", a half-hour production (with a only a soundalike cast, including a young Corey Burton as Luke!) that tells the story behind Han's comment about "that bounty hunter on Ord Mantell" in the latter film. It was released as a record in 1983, and can only be found online now.

These plays, being adaptations of the Star Wars original trilogy, feature most of the plot-related tropes found in those films. Tropes unique to the radio plays are listed below.

These dramas provide examples of: