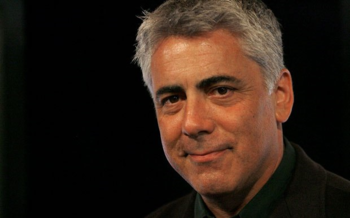 "We all look to have transcendent experiences that lift us out of the everyday, and fear is a good one. But, I think it's the same reason why people want to laugh their heads off."
Advertisement:

Adam Arkin (born August 19, 1956 in Brooklyn, New York) is an American television, film and stage actor and director. The son of actor Alan Arkin, he has a tendency to pick up awards on a fairly regular basis, such as a Tony, three primetime Emmys, four SAG awards and a DGA award. He's appeared in shows such as Chicago Hope, Monk, Sons of Anarchy, Justified, Masters of Sex and State of Affairs, also serving as a director for many of those shows.

He was married to Linda Sublette and Phyllis Lyons, and is currently married to Michelle Dunker, and has one child with Lyons. His father is actor Alan Arkin and his brothers are actors Matthew Arkin and Anthony Arkin.