Web Video / The Booth at the End 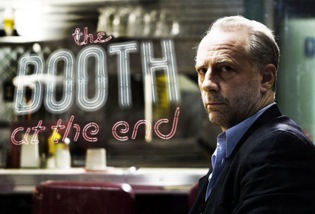 How far would you go to get what you want?
Sister Carmel: Do you believe in God?
The Man: I believe in the details.
Advertisement:

A mysterious, unnamed Man (Xander Berkeley) sits at a booth at the end of a diner. People approach him because they've heard The Man has a gift. He can solve their problems: A parent with a sick child, a woman who wants to be prettier, a nun who has lost her faith. The Man can give these people what they want. For a price. The Man makes a proposition. In exchange for realizing their desires, these individuals must complete a task, return to The Man, and describe every step in detail. The trick is that these tasks are things that would normally be inconceivable to them. But The Man never forces anyone to do anything. It's always up to the individual to start - or stop. The Booth at the End asks the question: How far would you go to get what you want?

has the first season (originally a series of shorts) collected into five 23-minute episodes and a second season which premiered on August 6th, 2012.