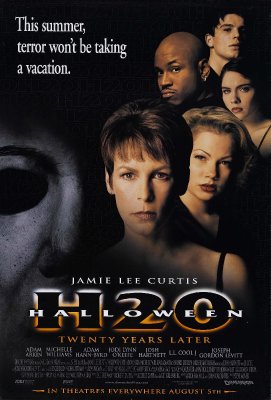 Laurie Strode: You've heard the story?
Will Brennan: Who hasn't? Michael Myers. It's like 20 years ago?
Laurie: 1978.
Will: And the girl that...what happened to the sister, she died, right?
Laurie: No, she faked her death... and now, she's the headmistress of a very posh, secluded private school in Northern California — hoping and praying every year...that her brother won't find her.
Advertisement:

Ignoring the continuity of the last three films of the Halloween franchise, Halloween H20: Twenty Years Later picks up the story of Final Girl Laurie Strode (Jamie Lee Curtis). After faking her death to live in peace following the horrific events during the Halloween night of 1978, Laurie had changed her name to Keri Tate, had a son, and became a headmistress for a high school far away from Haddonfield, Illinois.

Michael Myers, however, has finally tracked Laurie down, and after two decades of waiting, he comes back into her life — and enters the lives of a number of students, including Laurie's son — in order to kill her once and for all...

While it offered a solid conclusion to the story of Laurie Strode, that didn't stop the suits from making a sequel.

In a rather amusing footnote: the film was directed by Steve Miner, who also directed the second and third Friday the 13th movies—making him the only filmmaker ever to direct installments in more than one of the "big three" Slasher Movie franchises (Halloween, Friday the 13th, and A Nightmare on Elm Street).