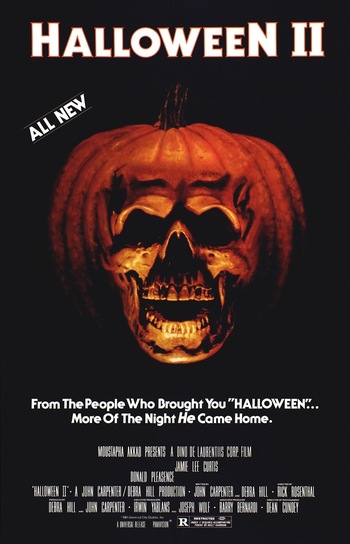 Nightmare Face aside, whoever did this cool jack-o'-lantern deserves an award.
"He was my patient for fifteen years. He became an obsession with me, until I realized there was nothing within him, neither conscience nor reason, that was even remotely human. An hour ago I stood up and fired six shots into him and then he just got up and walked away. I am talking about the real possibility that he is still out there!"
— Dr. Loomis
Advertisement:

Halloween II is the first sequel in the Halloween series, written and produced by John Carpenter and Debra Hill, directed by Rick Rosenthal, and released in 1981. It picks up directly after the events of the first film.

After having shot escaped killer Michael Myers six times, Dr. Loomis (Donald Pleasence) believes he has saved high school student Laurie Strode (Jamie Lee Curtis), who has survived the violent rampage of the psychopath that tried to kill her. Loomis heads out of the house to find nothing on the ground but an empty spot, leading him to believe that Michael lived through the gunshots. While paramedics take Laurie to the local hospital to recover, Haddonfield police and Dr. Loomis search for Michael, unaware that he has learned of Laurie's location — and that he has a hidden reason for wanting to kill her...

While it didn't enjoy the first film's critical success, Halloween II was still very well-received by fans and was a box office success. Carpenter initially felt the story was over after the first film, but when pressured by producers to make a second installment, he intended for this film to mark the end of the Michael Myers story for good, and the next film in the franchise did something completely different altogether. Two of the Halloween sequels pick up after the events of this film: Halloween 4: The Return of Michael Myers serves as a direct sequel to the events of this film with a new protagonist, while Halloween H20: Twenty Years Later ignores Halloween 4 (and its two sequels) to continue the story of Laurie Strode. Halloween (2018), on the other hand, supplants this film as the direct sequel to the original, retconning away both this film and its Plot Twist.

Not to be confused with Halloween II (2009), the sequel to Rob Zombie's 2007 Halloween remake.

Laurie Strode is the Final Girl and main heroine of the Halloween series. She becomes a target of Michael Myers while dropping off a key at his childhood home and is stalked by him.

Laurie Strode is the Final Girl and main heroine of the Halloween series. She becomes a target of Michael Myers while dropping off a key at his childhood home and is stalked by him.