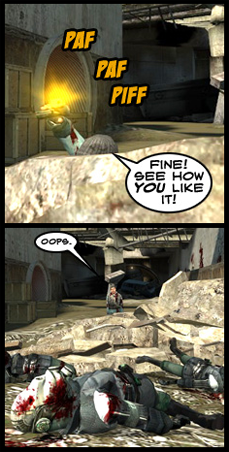 Robin: [after Ahchoo shoots the noose off his neck] Nice shooting, Ahchoo.
Ahchoo: To tell you the truth, I was aiming for the hangman.
— Robin Hood: Men in Tights

We've all seen people hit impossible targets at great lengths under unbelievable circumstances. But occasionally, a hero will make a seemingly impossible shot, be congratulated on his awesomeness, and admit that he was aiming for something else entirely.

Often used to subvert an awesome moment into a funny one. May be the result of the Pinball Projectile. Common when something needs to be hit by a character with legendarily lousy aim.

Contrast Exactly What I Aimed At (although that trope may sometimes be an example of this one covered up with a hasty excuse).