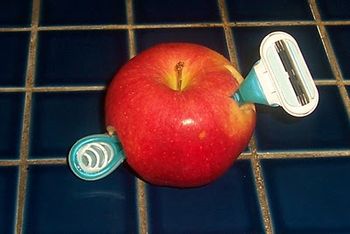 Now they've gone too far.
"How many people out there are doing the old razor blade in the apple trick? Good... kids goin' to the hospital. That's... that's the spirit of Halloween. Hope there's enough room."
— Caligari, American Nightmare
Advertisement:

You just came home from trick-or-treating. You pour out your candy all over the floor, looking over your hoard.

"Now, now, eat something healthy first. How about that apple Mr. Hick gave you?"

A trope common in Urban Legends, this is when someone puts something sharp, pointy, or just unpleasant into someone's food. Common objects to put in are pins, needles, and razor blades. Note that this is not just for Halloween candy; this applies to all foods equally, but gifts tend to be prevalent.

Named for one of the major examples: apples filled with razor blades.

Not to be confused with the giant, kid-crushing apples/cherries/some sort of killer fruit of the rose family in I Wanna Be the Guy. For when this trope is used to sneak dangerous objects to people with no intention of consuming the food item, it's Jail Bake.

It should be noted that there has never been a recorded straight instance of this happening; the World War II example below aside, it is entirely an Urban Legend. There are documented cases of persons attempting to invoke this trope, however. Compare the Super-Trope, Tampering with Food and Drink, as well as Revenge Is a Dish Best Served, where the altered food is intended for someone specific instead of being distributed For the Evulz.