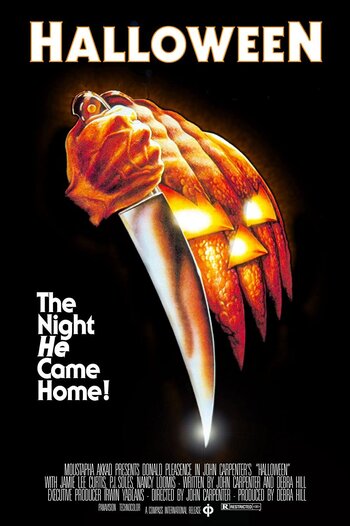 Oh, there's gonna be some carving, alright.
"I met him fifteen years ago. I was told there was nothing left; no reason, no conscience, no understanding — in even the most rudimentary sense — of life or death, of good or evil, of right or wrong. I met this six-year-old child, with this blank, pale, emotionless face, and the blackest eyes... the Devil's eyes. I spent eight years trying to reach him, and then another seven trying to keep him locked up, because I realized that what was living behind that boy's eyes was purely and simply... evil."
— Dr. Sam Loomis
Advertisement:

Halloween is a 1978 American horror film directed by John Carpenter (who also co-wrote the screenplay with producer Debra Hill) that has gone on to become one of the most profitable independent films of all time as well as one of the most influential works of modern horror, largely credited as the Trope Codifier for the Slasher Movie formula conceived by Psycho and Black Christmas (1974), as well as the genre's first true entry.

Halloween night, 1963: In Haddonfield, Illinois, six-year-old Michael Myers picks up a kitchen knife and stabs his teenage sister Judith to death without any explanation. Young Michael is committed to Smith's Grove Sanitarium and placed under the watchful eye of Dr. Samuel Loomis (Donald Pleasence). Fifteen years later — on the night before Halloween — he escapes from the asylum and heads for home, with Loomis soon following in pursuit. Back in Haddonfield, meanwhile, teenager Laurie Strode (Jamie Lee Curtis) takes a job as a babysitter for Halloween. As the night of masks draws nearer, she keeps noticing an eerie masked figure stalking her. While Laurie believes a schoolmate is playing a harmless Halloween trick on her, she and her friends have no idea of the danger that is waiting for them and Haddonfield...

Produced on a shoestring budget, Halloween became a massive success on its release and inspired countless other slasher films in its wake. It also spawned an extensive movie franchise starting with Halloween II (1981), followed by a remake/franchise reboot in 2007. Then, in 2018, yet another film in the series was created as a direct sequel to this film, ignoring all the others.

It's Halloween. I guess everyone's entitled to one good trope:

Laurie Strode: It was the Boogeyman.
Dr. Loomis: As a matter of fact...it was.
Feedback